Should Companies Be Using Generation Stereotypes? 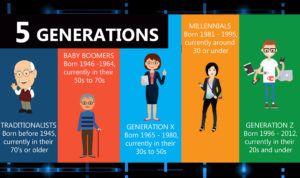 The term Millennial pertains to the 83 Million US citizens born between 1981 and 2000 covering every race, religion and family upbringing in those age groups. A small word covering two decades of people. If you think about the term Generation X, Millennial, Baby Boomer for a few moments, you will quickly realize that it is immensely difficult to summarize how two decades of people think, and why they think that way. Or even more difficult, but perhaps the most important, how to take that information and apply it in meaningful way in a company to drive effective change.

I am often asked to speak around North America about what the Millennial demographic thinks, does, and behaves, which often leaves me puzzled on how to answer a question that involves so many differences. I do not believe that companies want to know what is common between 18 to 34 year olds, but rather, they are curious on a much smaller demographic, a subset of the Millennial generation and what changes in history that surround them. In other words, when a corporation uses the term Millennial they are specifying a group that compasses all of the disruptive changes that are taking place in the world. For most organizations, using the term Millennial usually means a 5 year spectrum, people who are about to graduate to people who are about 3 years into industry. However, when utilizing this term, make sure to hone in the demographic from just a wide range of 20 years and switch that with who you actually want to hire, market or retain. The small demographic, the more accurate the stereotype.

In this short post, I will unpack the generation stereotype and derive meaning on what people are actually looking for, along with its lack of controversy.

Now before you think this is a rant about another word that people cannot use, consequently blacklisting the words: Millennial, Generation X, Baby Boomer, this post is to help understand how to effectively use generations to understand trends and the changes in the younger demographics. My end goal is to help people within corporations find ways to understand each other, specifically with generation age groups. Hence, I think it’s fine to use the generational terms, however, just know that is has its limitations because of the enormous amount of differences they covers.

Why Are Generations Not a Controversial Stereotype?

It took me several months speaking on Millennials to eventually realize that the term Millennial was used as a stamp or rather stereotype the young workforce in the United States. The concept became clear when I switched a sentence that was originally for Millennials and put a race and evaluated the sentence in emotional weight. For instance, 75% of Millennials were surveyed in 2016 by 300 employees concluded that they were spoiled and entitled. If you would switch a race or a different group in there, the sentence suddenly carry emotional weight. 75% of (African Americans | Hispanic) were surveyed in 2016 by 300 employees concluding that they were spoiled and entitled. A perfect headline for a media outlet. Hence, a small change in the noun of the sentence brings new emotional significance indicating the complexity of why generation stereotypes do not seem as negative.

What I find particularly fascinating about this stereotype is why it has not been blacklisted. Upon reflection and research I believe that generation generalization is not consider a negative through the inherit truth that generation differences occur in adolescent development. One who is older naturally has more wisdom from life experience while the younger does not.

While unpacking generations and understanding their importance in regards to how we see the world, its paramount to read the Classics. Generations – The History of America’s Future 1584 to 2069 by William Strauss and Neil Howe is one of the pillars on how we think about Generations today. Even if you haven’t heard of this book you maybe familiar with its terminology. That book was responsible for the adoption of the term Millennial. Heard of Generation Y? That was for a similar time frame period identical as Millennial, but it was coined by Harvard. Or better yet, have you heard of the term 13er? Probably not, but 13er is a similar time frame period to Generation X, written in the book, but it just did not catch on. Often the press popularizes terms neglecting some and running with others. Reading the Classics will help you understand the generation importance and their influences on the society at large.

In Howe and Strauss’s, 500 plus page book that covers their breakdown of different generations spanning 400 years, they established what influences a generation which they coined as ‘Peer Personality.’ More succinctly ‘A set of collective behavioral traits and attitudes that later express themselves throughout a generation’s lifecycle trajectory.’ (Howe & Lewis 32). The term is one of the biggest determinate of what really creates generation behavior combining family, political, lifestyle and future expectations – below are the three pillars: 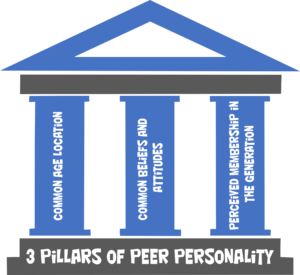 The way that the social scientists Howe and Lewis determined what constitutes a generation, involved looking at the first pillar ‘common age location’ by positioning the demographic against the previous history that took place. Next, they evaluated the attitudes and beliefs held by the generation specifically looking at what attitudes similar aged individuals shared. Lastly, the third pillar was evaluated by looking at what people within society thought of themselves in terms of their generation. With this robust process, the authors were able to map out generation cycles and new insights to generation theory. Invariably, social scientists realized that generations influence one other because several generations are alive at the same time. Leading to a variety of complexity when determining what trait belonged to what generation. In order to provide clarity to this dependency problem, Howe & Strauss leveraged an analogy of a train to simplify this complexity.

Generations as a Train Track 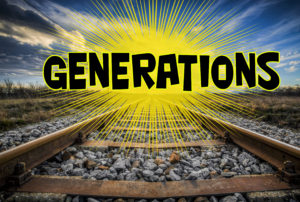 Imagine that there is a train track which spans a life time. The starting point is birth and the destination is death. Periodically along the track there is a station where the train will stop and drop off passengers. In this example, several trains are on the track all heading the same direction at the same speed. Each train is symbolic of a generation. Born of a specific time and experiencing the same events together. Each time a train stops at a station and drops off passengers, symbolically being death, the train eventually runs out of passengers before reaching the end destination where it has no passengers left. Each train has its own unique experience and the trains behind it will be influenced in some way with the front train’s history.

There are various examples throughout the book that conclude different events and their impression upon a particular generation. However, the complexity comes in where each generation belief might not be attributed to an individual event, but rather a series of events. Each event could have a 500 page book explaining the interdependence surrounding each event. Unfortunately, trying to summarize every event in several decades and relating them to the individual beliefs is immensely difficult and highly unreliable due to each person interpreting the event differently. While this may seem to completely undermine the use for the generation stereotypes, there is subtle truth the generation holds. Though, as more events and variables are introduced, the end results become less and less accurate.

Effective Use of Generation Stereotypes – Structure vs. Individual 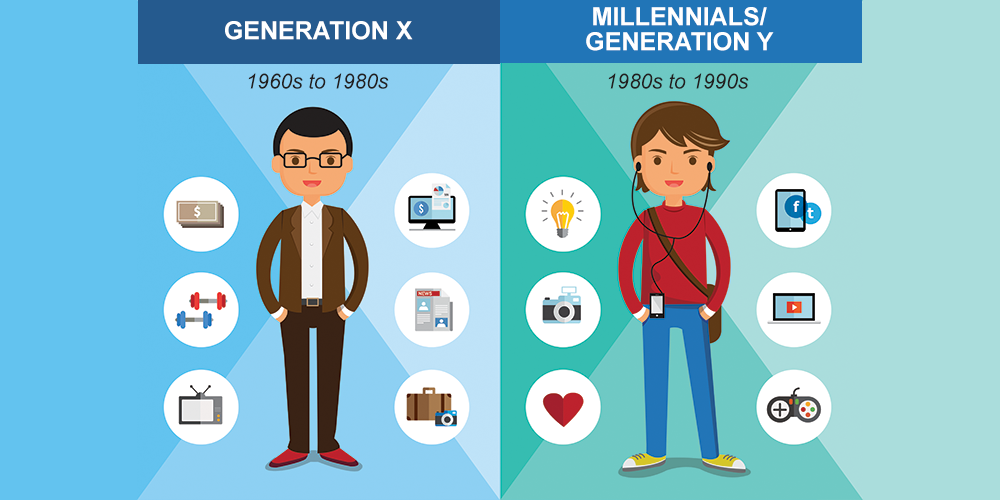 Generation stereotyping can be used in two ways: individual and structure. Imagine that there was a reliable study that came out that stated 80% of Millennials like black coffee in the morning and you are planning a new hire party that consisted of solely Millennials. The question then is, how do you use this stat effectively to make sure that you have a good party? If you are to approach a Millennial in the party and assume that they like black coffee, you will be stereotyping, but if you apply it to the system, buying 80% black coffee in the inventory, you will effectively leveraging the stereotype. Hence, there are places where a generation stereotype can be effectively used as long as it is for the structure and not the individual within that structure.