How to 12x the Number of Applicants for a Job Posting 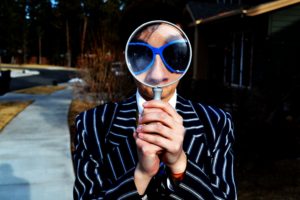 Begrudgingly, I decided to join a friend who was going to a conference in downtown Oakland, California. At the time, I lived in Berkeley, just five miles north of the conference. My friend had an extra ticket and thought it would beneficial for me to attend Hustle Con– an event where the top entrepreneurs around the world would share their business stories. As someone who frequently speaks at conferences, I often avoid going to them because I like to consume the content at my own pace and find crowds distracting. However, I still went.

During the second conference day, founder of the company ‘Book in a Box’ and 4 Time New York Time Bestseller author, Tucker Max, began to share his story. Unlike the other speakers, the successful author focused little on his career success and more on hiring. Now, the irony behind his talk is quite extreme. A lot of his books revolve around women, picking up, seduction, embarrassing stories: I Hope They Serve Beer in Hell, Assholes Finish First, and Sloppy Seconds. Not that I particularly mind, but I thought it was ironic how a lot of his book revolve around attracting women and now his talk focus on attracting new hires [as of course new employees].

His talk and charisma on stage were second to none. He showed up with sweatpants along with a nonchalant attitude. (Keynote here on Youtube). Two minutes in, he started getting to the meat of the talk which involved how to increase the number of submissions to a job posting. This is an enormously difficult problem for small companies especially since they don’t have a strong brand that will naturally attract talent. In fact, Indeed, a job posting site, through survey data found that over half of business owners struggle to find the right talent for a particular position.

As a small business owner, I tuned in, knowing that what was said next could change my business. His ‘hook’ was that he took a standard job ad with the statistics:

Added a couple new tricks for the same job ad and got:

Quite a significant jump! What did he do to achieve this feat? And could this process be replicated for other businesses? Both answers are in this post. In fact, Tucker boiled down his process into a four steps process:

Step 1: Who Is The Perfect Person for the Job?

A lot of the text reads differently than how someone would actually say it. That is why Tucker is advocating more of a humanized approach. With the amount of competition in the job market, employers need to sell candidates on why they should apply for the opening. See Tucker’s job post: 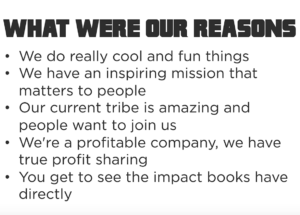 In addition to listing the benefits in a humanized approach, listing a story is also a great way to reel candidates in. However, having a story in a job ad is not a simple task because job ads are not novel sized advertisements. Hence, there needs to be different phases that are immensely succinct and build off of each other. Here are those phases:

Grab the reader attention by opening with a catchy phrase: 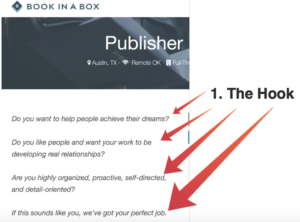 Covering what exactly the potential candidate is doing in the role and why it matters. 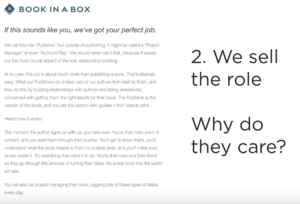 3.  Go through the pleasure and pain 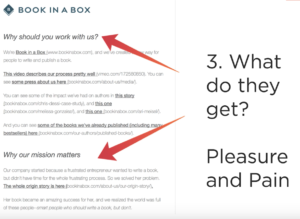 Why they should work with your company.

Follow up the pain and pleasure of actual people who were interviewed in the company and their experience working there. Remember to not distort the language that they use, even if it does not sound professional. The goal is to capture the unique response that people at your company feel.

On a side note, I noticed that Tucker Max didn’t suggest using videos for testimonials. I suggest leveraging video as well as written because videos can work better than plain text. Just add a video link in the testimonial section.

Cap off the story with adding the boring details at the end. You already have the reader’s attention so they can absorb some boring information. 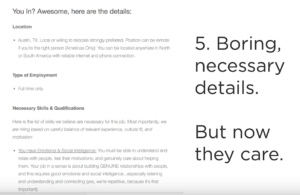 Step 3: Pay Attention to the Words You Use

Write the way you would write to a friend. An example Max used was the job ad for Head of PR. People don’t really care that much for that a PR position because it has negative association. Hence, renaming Head of PR to Head of Branding, or Digital Branding Director has a better ring to it. Closer to what people will actually say outside of the corporate world.

On a more copywriting note, using particular language resonates differently with each demographic. Using words such as genius or rockstar tend to attract men, while the word learner tends to attract women. Hence, by paying attention to the copy, you can effectively increase the applicant submissions of different demographics. There are various articles written on how to do this (here, here, or even here).

Traditionally in large corporations, there is a bonus for whoever can refer an employee to fill a particular job opening. The reasoning behind this is several fold: employee references are usually better than cold ones, referrals are cheaper than recruiting budgets, and employees can help shape the culture of the workplace.

By Tucker Max’s adding something called external referrals. This involved adding a line incentivizing viewers to share the post so people could earn $5k just for referring someone to the company. While this may seem expensive, it is actually quite cheap compared to recruiting companies who would charge $25,000 and upwards.

Here is a Facebook post that Tucker Max used. Note the reach and the number of shares. 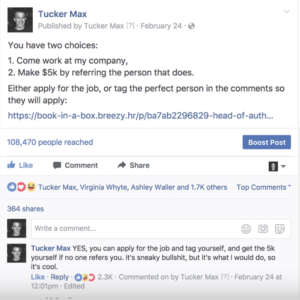 One thing that really helped with the reach is where Tucker Max says to tag yourself in the comment. That way, the post showed up on that person’s wall where all of their friends would see it as well. With this simple step, you effectively turn any viewer into a potential recruiter for your company.

Well there you have it, unfortunately, his link to the website is no longer available because his domain name changed but you can view the actual keynote.