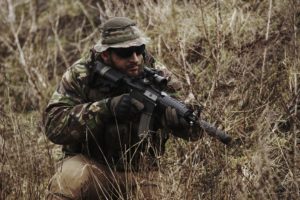 In the process of reading Extreme Ownership- How U.S. Navy Seal Lead and Win, the authors share their accounts of military experience, lessons learned and its applicability to the workplace. I often find reading books out of traditional corporate books very helpful in understanding the underlying principles of leading and creating great teams. The authors, both Navy SEALS, break down individual characteristics of a type of leadership that was particular useful to them in the military called ‘Extreme Ownership’. Each aspect of ‘Extreme Ownership’ is supported by a military story and a business case study to show effectiveness in the world.

In the chapter, Decentralized Leadership, the authors discuss how self-sufficient units can operate autonomous outside of their manager’s direction. When supporting this model in a corporate case study, Willink states “human beings are generally not capable of managing more than six to ten people” (Willink & Babin 183). The statement by Willink is often widely agreed upon, however, in further analysis I don’t think this true. From unpacking this premise and its implication, we will have a better understand of how many reports should answer to a manager.

Later in the chapter, Willink states that ‘No one senior leader can be expected to manage dozens of individuals, much less hundreds.’ Further solidifying his point on the number of necessary reports to manager ratio. In Harvard Business Review, “How Google Sold Its Engineers on Management”, the author in analysis of Google’s software engineering management structure, states that ‘It’s not uncommon to find engineering managers with 30 direct reports.’ This is an alarming 3 to 5 times more than what Willink stated and in complete disagreement with many common theories in management. But why? How could one of the most effective companies in the world, Google, disagree so entirely with one of the greatest military division in the world, Navy SEALs?

Is one of the wrong, both right or both wrong? My argument here is that they are both right, however, a significant amount of context is missed when discussing management. For instance, how much communication is needed between report and manager, is the manager an individual contributor, or what is the level of intensity? Each attributes needs to be taken into question.

“There is only so much you can meddle when you have 30 people on your team, so you have to focus on creating the best environment for engineers to make things happen.”

In other words, the environment fosters productivity for the engineers at Google versus the pressure coming from the management. Google has also been known to place emphasis on hiring elite engineers rather than taking average engineers and making them great. Consequently, this involves less management guidance.

However, the author’s reasoning for flatter hierarchies is not completely sound. The author of the article later goes on to say ‘Seldom do employees accept top-down directives without question.’ As if a company with a steep hierarchy will just accept initiatives. In the military, Willink suggests that leaders should deliver meetings in a style that prompts people will to ask questions and be sold on the overall objectives and mission. In other words, even in the military initiatives are questionable and provided context. Flatter hierarchies does not mean that people will inevitable become compliant.

Back to the original question – how many reports to manager, here are several things that a manager will need to take into perspective. First, a manager has two different kinds of unit systems. Think of it as a health bar in a video game. One is for time, the other is for energy. Once a manager runs out of one of these, the maximum amount of effort is achieved. Either the manager burned out or they ran out of time. The result will determine how many reports that can realistically have.

Based off of the responsibilities of a manager and their reports, a manager should consider the following options:

Each manager has a range of activities in management. For engineering, it would be career development, code reviews, providing insight on major features and disclosing timelines to upper management. However, if the manager is also an individual contributor, there would be less time for management.

Some activities are more stressful than others. In a military operation, soldiers are taxed immensely compared to a software engineer who is reviewing a section of code. Hence, making energy expenditure a needed variable.

Along with these three attributes there are dozens of others that are worth considering for optimal team performance. Each one determines how much energy and time is needed for a manager and will consequently determine the number of directs that should report to a manager. When taking these factors into consideration both viewpoints are correct given their implied context. For the military the standard size of a platoon makes sense as well as Google’s management structure. However, I do not think all management environments should have a maximum ten reports. The ideal number depends greatly on the environment.