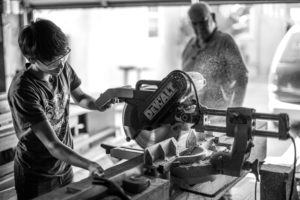 Earlier this week, I wrote a post, here, discussing the first part of Motivation 3.0. In that post, I covered what Motivation 3.0 is, (creating a workplace environment to foster intrinsic motivation), the three pillars of Motivation 3.0, and a deep dive into autonomy. Covering those parts, I would like to discuss the second pillar- mastery. With these three pillars in place, according to the Self-Determination Theory, people will engage in intrinsic motivation in the workplace- the most powerful and highest engagement form of motivation. Note, these pillars are from the book Drive by Daniel H. Pink, if you want to learn more about these ideas.

I found this book a fascinating read knowing that a lot of new workplace approaches are being experimented in my own backyard- Silicon Valley. If you find yourself interested in knowing where we are headed as a workplace, or maybe different views on employee engagement, definitely give this book a read. The case studies alone make it a worthy read.

In Drive, Pink breaks down mastery two three parts mindset, mastery is a pain, and mastery is a asymptote. After reading this chapter, I would argue that ‘Mastery is a Asymptote’, the concept that mastery is not a linear progression but over time you get smaller and smaller returns, is a fairly well known concept. With that said, I would like to expand upon another concept in the chapter as the third point called ‘flow’ popularized by the psychologist Mihaly Csikszentmihalyi.

Let’s dive into the first aspect of mastery:

Mastery is a Mindset

What makes someone continue to learn and what make someone complacent in the quest of mastery? Many people have researched this question extensively knowing that if the answered, they would be able to determine someone’s future success. One of the people who took a crack at this question is the world renowned Stanford researcher Carol Dweck. In her quest, her discovery revolutionized the way we look at mastery – it’s about mindset. She coined two theories that capture the complexity behind mastery: ‘entity theory’ and ‘incremental theory’.

‘Entity theory’ refers someone having a fixed mindset of mastery. That our abilities are an entity that do not change in size or form. Permanently stuck permanently in place. If you are smart, great, if not, you are out of luck. What she found fascinating with people with this particular mindset was that they would exercise confirmation bias. They would take on small goals and tasks that are well within their abilities, avoiding more difficult ones that would challenge their ‘self-theory’. Then, when they successful accomplished the task, it would reaffirm how that person saw themselves. 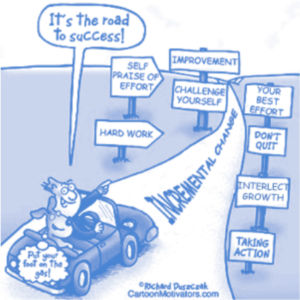 On the other hand, ‘incremental theory’, consists of a different perspective where someone has a malleable level of ability. If you work hard, you will improve over time and master just about anything. The ‘incremental theory’ mindset leads to someone having the mental ability to continue pushing to become masterful at whatever they choose. Unlike people who fixed perceptions of their abilities, people with ‘incremental theory’ outlook pursue mastery knowing that they can improve upon their skills. Mastery is a mindset.

Mastery is a Pain

You might have heard the terms, ‘no pain no gain’, ‘change comes with pain’, or the most recent popularized personality trait ‘grit’. Each term reflects a truth about mastery- it comes with pain, but also our abilities are malleable. The term grit came from researchers who looked into West Point cadets trying to uncover what made some more successful than others. What they found was that success was not related from intelligence, strategy, or strength but instead from a psychological trait, ‘grit’, the ability to pursue a goal wholeheartedly.

While grit is applied to overcoming psychological blocks, it can also be applied to physicals process such as stimulating hypertrophy. At the elite level, athletes go through cyclic, or blocked training. Each block adds on top of each other, providing a solid foundation for a large peak performance. The mind, body and spirit all through an enormous amount of pain as they adapt to the new load. Once the body experiences over stimulus for a week or so, depending on the type of training, the weight is removed, the body recovers and achieves mastery at a new level. Mastery is a pain.

Whether it’s psychological or physical, if someone wants to achieve mastery, they need to learn to endure pain. The better they can endure pain, the easier time they will find it pushing the upper layers to mastery.

Mihaly Csikszentmihalyi in 1975 published Beyond Boredom and Anxiety: Experiencing Flow in Work and Play, his first public work attempting to showcase the industry shifting phenomena ‘flow’. Flow consists of a state of mind where time seems to disappear and all attention is focused on a particular task giving the individual a deep and fulfilling sense of happiness. The area where flow relates to Mastery where in order for flow to take place, a few conditions need to be present- challenge and skill. The individual needs to finds something challenging enough that matches their level of skill to reach flow.

Now, with the immediate sense of flow, simply doing a task a few times does not create mastery. However, through adaptive performance, the ability for someone to handle change, the task soon becomes not very challenging and the person performing the task reaches boredom. Hence, in order to reach the heavenly state of flow, the individual will need to increase the level of difficult to reach flow. As the person continuous to adapt, the difficult rises and they eventually reach a state of mastery in pursuit of the state of flow.

Below is a diagram showing the differences between skill level and challenge and how the psyche reacts. 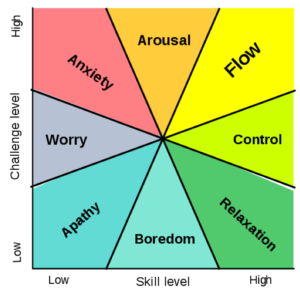 The feeling of reaching mastery in a difficult task is an undesirable sensation. However it is not an easy one, but worth the pursuit given the new Motivation 3.0 workplace. When looking at your own level of mastery, here are a few things to ask yourself:

With the concepts of mindset, pain and flow, one can learn how to achieve mastery in the workplace. Later this week, I will address the last pillar of Motivation 3.0 to complete what it takes to stimulate intrinsic motivation.