Should Companies Give Up On the Quest for Rockstar Talent? 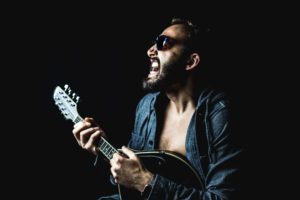 “I just hire some smart people and get out of the way” – IDEO, chairman and founder.

You have probably heard of this quote numerous times from Silicon Valley companies that believe as long as you hire smart people, get out of their way, and get a few ping pong tables, the company will be successful. Is hiring great talent really to answer to all a company’s problems? Some would yes others would say no. Or an even better question, can a great organization operate with only C-level players (C as in average, not corporate)?

Most companies would say yes to the first question and no to the second. However, it is quite the opposite, there are numerous cases where companies took very average employees like Toyota and through systems and operations create high performing teams. But should companies give up on the search for talent quest and just copy Toyota? It really depends, and there is a lot of grey area around recruiting. In this short post I would like to discuss a few of the challenges that surround the quest for ‘Rockstar Talent’.

Going from Good to Great is Not Linear, But Exponential

Mihaly Csikszentmihalyi PhD, most notably known for his findings around Flow psychology written some fascinating work on creativity and work output on professionals. In his literature, he discusses that the number of discoveries in a particular field is not evenly distributed through the pioneers. This is known as Price’s Law. In fact, if you take the square root of the population, they are about responsible for half of the work. Mathematically, say if there is 100 people, 10 people are responsible for 50% of the inventions in that particular field. What is even more startling about this finding is that, this equation does not apply to just one field, but all fields and even the workforce.

When going from good to great, a person moves from the 90% group to the 10% group which is responsible for half of the production. The goal for many organizations is how to find these 10% individuals and recruiting them devilishly. If there was a pragmatic way to do this, every company would known exactly what to do, but unfortunately, finding this talent is much more complicated than putting a job post on Indeed.

The Controversy Behind Screening for Talent

Many companies claim that they can find the best talent before they hire the individual. Usually this consists of a battery of interviews questions, projects and tests that the candidate has to go through. If they pass with flying colors, they are in! However, research tells us different.

Frank Schmidt and John Hunter, two organizational psychologists put a study together covering 85 years of research findings focusing on the best ways to screen for talent. In their extensive study, they examined 19 methods that organizations used to select new employees and compared that with employee performance. Below is what they found: 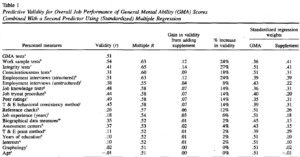 Here is where the controversy starts. On this graph, a lot of erroneous beliefs are dispelled at once. For starters, age and graphology, how someone’s handwriting looks, had a -.01 and .02 correlation with job success. Next, years of education had an only .10 correlation with job success. As you rise higher in the study, you get to the heart of the controversy – GMA test. These tests, also known as IQ tests were the highest correlated with future job performance.

Boom, taking a minute to let that sink in.

A lot of controversy surrounds using intelligence tests to screen candidates as stated in various articles. There is something else surprising- IQ account for only .51 correlation with job performance. That means that 50% of the time, how someone scores on a IQ tests will be different than how they perform on a job. This is also the best measure that the researchers found in their 85 year study.

Other Barriers to Finding Top Talent

Two other major barriers come up with finding top talent, performance variation and psychology bias. For performance variation, overtime, people’s job performance fluctuates due to life goals, weather, changes at work, and a million other causation factors. How someone does in a job interview process is a snapshot of their capability and has great potential to change in the course of working somewhere. The second issue is psychological bias. Often talked about today, psychological bias relates to hiring people who are like ‘us’ problem. In other words, the predicament arises when you are trying to hire more talented individuals into your organization when you currently have average talent. Unfortunately, through bias, the less talented individuals are less likely to hire higher ones, as Pfeffer and Sutton point out in their book Dangerous Half Truths & Total Nonsense

One of the biggest topics trends today in the workplace is interview bias. Why are they biased? Because people are involved. So how do you remove the bias? Bias training? Unfortunately, its effectiveness is questionable. That leaves us with removing people from the interview process. Here is where the challenge is, in the research that Schmidt and Hunter found, having standardized tests are the highest correlation to job performance. The workplace needs to choose with removing the people from interview and going with IQ tests or being biased and avoid using the IQ tests. Unfortunately, looking for rockstars hasn’t gotten any easier.