Socialism vs Capitalism – Solving Intergroup Conflict in the Workplace 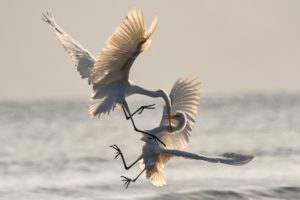 According to Gallup Research in 2016, over half of 18-29 years see socialism in a positive light while less than a quarter of 65+ year old employees do. While on first glance these difference don’t seem noteworthy, its are symbolic that the workplace has become an increasing varied in viewpoints. In addition, due to social media outlets, many internal company conflicts can easily become nationwide political stories by a simple tweet or post. Point being, managers and employees need to recognize that difference of opinions can carry emotional weight beyond just the cubicle field. Learning how to address these issues effectively can save companies the headache of public relations storms and employees ending up in Twitter ostracism.

There are three different ways to addressing different beliefs in the workplace: avoidance, indirectly addressing or directly addressing. In this short article, I will like to touch upon each one in the likely case that you face this in your workplace, you will have a general idea of how to approach intergroup conflict.

Avoidance is generally the most common tactic by keeping workplace belief differences outside of the workplace. The Society of Human Resource in an article, discussed how employers can avoid their difference in opinions specifically political ones “Regardless of the intent behind the employee’s decision to wear the shirt, several courts have held co-workers wearing Confederate flag clothing can be a contributing factor in finding the existence of a racially hostile work environment,” remarked Ted Schroeder, an attorney with Littler in Pittsburgh and Morgantown, W.Va. “For this reason, we recommend that HR address the issue as soon as it becomes aware of it, rather than waiting for a complaint.”

The easiest solution to this controversial problem involves implementing human resource policies that prevent employees from behaving in certain ways such as sporting political attire. If employees cross this boundary, managers only need to communicate the broken policy to the employee and include human resources in the discussion.

Generation expert, Cara Siletto mentioned that part of the culprit of the increasing viewpoints in the workplace involves “The older workforce was trained to separate their ‘personal’ personality, attire and relationships from the ‘professional’ as soon as they walked in that office door. But the younger workforce feels like you’re hiring the whole person, including their opinions,” she said. “I encourage people to be themselves at work … just know that people are watching you.”

While avoidance is pretty straight forward when considering political topics, what would you do if different teammates are from different cultural background with strong amonsity and tension? Thomas Pettigrew, PhD, a researcher specializing in intergroup conflict put together a meta-analysis of 515 studies focusing on how different groups whether that be cultural, political, sex, age work together in a cohesive way. After normalizing the data, the professor found that emotional contact was the primary ingredient. However, not just any emotional contact, usually four things have to be in place:

Many companies foster company efforts that meet these conditions in the form of volunteering time off, team building events like escape rooms, and reverse mentoring programs. By implementing these programs, Pettigrew’s conditions are met and employees are able to put aside their differences consequently building a mutual understanding for one another.

Recently, directly addressing these differences in the workplace has become a more mainstream approach to solving intergroup conflict. Joseph Grenny, the author of Crucial Conversations: Tools for Talking when Stakes Are High usually sits down with people in workplace problems and has each person had his say without interruption as the other took notes rather than presenting a different side of the story. Greeny would use a whiteboard to categorize the problems and pressed both to brainstorm solutions. As Greeny would put it ‘The employees aren’t exactly lunch buddies now, but the process works.’

The challenge to addressing heated emotional conflicts directly in the workplace is that specialized facilitators are usually needed to intervene. However, there are many companies that find directly addressing conflict useful.

There were always be differences of opinions in the workplace, but how a workplace decides to address these concerns will determine if they flourish, or will end up on the front page of Wall Street. Whether its capitalism vs socialism or some other conflict, there are a variety ways to overcome conflict and build cohesive workplace environments.