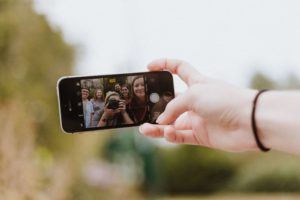 Personally I do not like selfies, however, I came across some interesting research that changed the way that I viewed selfies and could possible change your perspective as well.

I was reading Stumbling on Happiness by Daniel Gilbert which describes the science of how well can the human brain imagine its own future and its ability to predict which of those futures it will enjoy the most. In Chapter 10, Once Bitten, Gilbert was unpacking some quantitatively studies looking at people’s happiness before, during and after events. While reading this chapter I came across an alarming study.

During the 2000 presidential election campaign, voters from both the Al Gore and George Bush camps were asked how would they feel if their candidate won, and in a follow up, asked how they would feel if their candidate lost. Researches marked down the participants initial happiness predictions and waited after the election finished. Again, on December 14, the participants were surveyed about how they felt about the campaign results. After recording those findings the researchers patiently waited until April 1 to survey the candidates one more time. On the last survey they asked the votes about how they thought they felt when candidate won or lost on December 14. After comparing the data, the researchers astonished by their findings! See below: 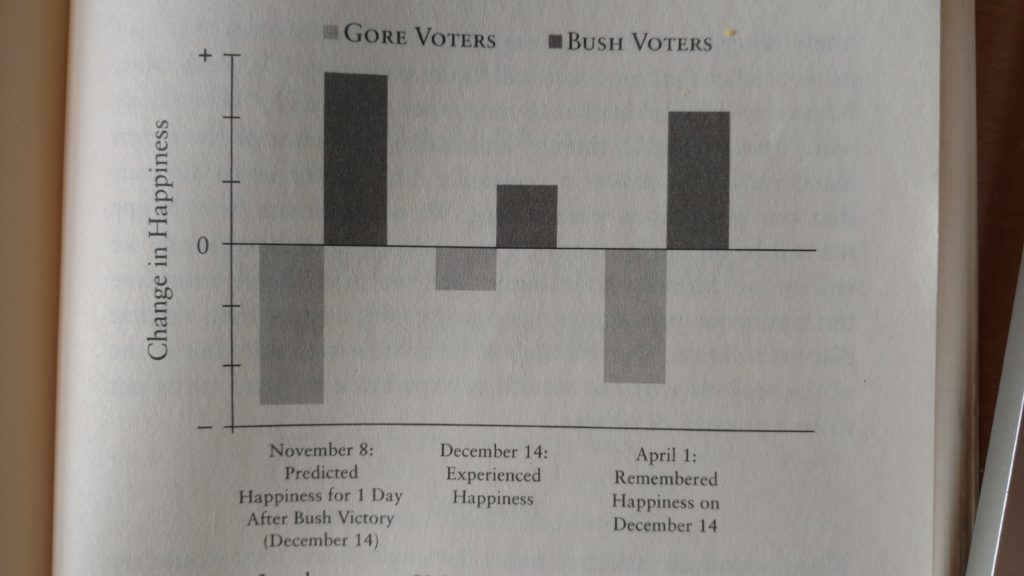 What the researchers uncovered was that the participants showed a wide variance on how they predicted how they would feel, how they actually felt, and what they thought they felt. In a bizarre way, people looked more forward to the event than the actual experience itself. If that wasn’t weird enough, people looking back, said they felt much better or worse than they actually had. The actual experience had the lowest level of happiness. Our happiness changes with time.

For me, the most alarming factor uncovered was how far off our ability to predict and also reflect on our past experiences are compared to what they actually are.

As someone who continuously helps with organizations with Millennials, some of the most common complaints are with phone usage and social media narcissism. These complaints usually stem from young individuals recording everything about their lives and putting it online for their friends to see. When I read the study above, I stumbled across an interesting idea:

Let’s say someone who is looking forward to a vacation is happier than them actually being there. While they are on vacation and they record everything that happens instead of being present. Then, when looking back in retrospect because they took plenty of pictures they will feel greater levels of happiness than when they were actually there. Hence, it is smarter to be less present because you won’t be as happy and instead focus on the anticipation of an event and retrospect of one. Recording the event such as taking selfies could be a smarter thing to do than actually be present.

That idea flies in the face of the whole ‘Be Present’ movement and a whole other group spiritual teachers on the subject. Sorry Eckhart Tolle.

What if we extend this past just taking selfies and looked at other areas of life such as setting and accomplishing goals. What if people who don’t take action on goals are smarter because from a short term perspective, they could achieve more happiness in the long run of life by not pursuing it.

I know what I am putting forward is a bit out there. With that said, it could be quite possible If someone is less present, it could influence someone’s perceived retrospective happiness changing the premise that people are the least happy when they are present.

As out there as this idea is, the research that supports shows that happiness can change throughout time. There are many dimensions to happiness, however, hopefully this can help explain some of the narcissistic tendencies that develop. What if the constant self absorbed culture is a manifestation of a bigger problem. Maybe it’s our present happiness may not exceed our perceived and retrospective happiness. Maybe Millennials have it right to take selfies all the day and avoid being present and we just don’t know it yet.