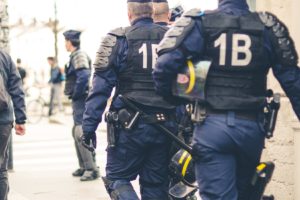 When there is an elephant in the room one should address it. But what if the elephant is behind you and everyone else can see it?

Earlier this week I was working with the police force in an one day training session regarding millennials. After lunch, the highest ranking police officer, the police chief, joined a session on accountability and feedback. About halfway through the session, he raised his hand and said, “you know what the real problem is, we simply do not have enough people applying for positions.”

At that moment, the elephant in the room had revealed itself. You see, the police force brought me in to address a retention issue in the department. Too many younger officers were leaving departments and by having this training, they were assuming that the retention issue could be solved. However, unknown to me at the time, each department had a much smaller amount of applicants applying for each position. And by smaller, I mean around 20% of what is what 20 years ago.

Before officers can apply to departments they must go through a police academy, but just like the departments, they are also experiencing a large drop in applicants. How are the police academies addressing this issue? Lowering the bar for applicants. That means, loosening the applicant criteria, for instance, Dallas Police Department, now allows applicants with tattoos and beards to departments nationwide allowing previous drug use and relaxed educational requirements. Police criteria standards have held steady for decades but with the up and coming generations, the United States struggles to find enough people to enter the police force.

The struggle to find quality candidates manifests itself through social media, mainstream media and generation values. Unfortunately, pensions don’t hold the same public appeal, along with stable careers. Many younger job seekers, value experience over things and if they want to travel the world before they settling down, chances are they won’t choose a career in the police force.

In addition, many Millennials are intimately aware what happens on social media, making them very conscious of the negative reputation that police officers have online. Movements such as Black Lives Matter have its roots in police shootings along with a hand full of others. Social media tends to exacerbate police altercations where local events can become international debates only in a few hours by a simple video and clicking upload. It’s not that only now police are being ridiculed, but technology allows various parties to be heard regardless of their intention and accuracy of what happened. Having such a negative public reputation, is it surprising that police force struggles to find talent?

Now, if that does not sound bad enough, it gets worse. If there are less applicants, the quality drops, and if the quality drops, many people will be joining the police force are joining for a paycheck rather than a calling. With relaxed standards that could mean police officers making more careless mistakes leading to more negative public relations and finally making it that much more difficult to attract talent. An endless downward spiral.

What to do Moving Forward

After talking immensely with the officers, changing the public perception seems like the problem’s root. However, changing public perception remains quite difficult to achieve. Should police make themselves more affable and friendly? Unfortunately, that does not work too well in the past, check out what happened in the Boston police department when the brought in Jeff Ross world renowned roast general here.

The police force faces a challenging predicament in law enforcement: their perception relies on appearing as an objective fortified entity that makes the best decisions possible. Fairly similar to how people view the government. By appearing more friendly and human, law enforcement decision making can become undermined and questionable making their society impact less meaningful.

Peter Drucker in his book, The Essential Drucker points out this change in workforce years before it actually happened. As he puts it “we are entering a knowledge society.” With this prediction, he stated that many industries, jobs, and occupations will at some point become obsolete and jobs such as white collar will rise. Throughout my career in helping various companies in different industries, I find Drucker’s claim sadly true where some industries continue to disappear because people don’t want to work in them or evaporating overnight from disruptive innovation.

Or could the police force end up increasing wages until it ends up like employees who are on poo patrol in San Francisco that are paid almost $200,000 a year? Would raising the salary attract more talent? Possibly, but various sources like The Motivation to Work by Frederick Herzberg point out that money does not increase job fulfillment. Hence, adding extra financial incentives could increase the workforce but many not the amount of people who actually want to become officers.

Maintaining a police force is an extremely complex issue and I don’t think it will be solved overnight. However, I do believe a lot can be done to help. I hope to one day be able to contribute to the solution. For I would rather live in a society with a strong police force, than a world without them living in anarchy.