Millennials Have It Harder Financially Than Other Generations; Here’s Why 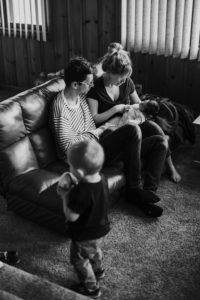 Growing up, my dad told me, “When I was 27, I had a Mercedes Benz, a house, and several rental residential property units.”

Now that I am 27, I don’t have a car, house, or any residential properties. What happened? Did I not work hard enough? Have I been lazy all these years?

I graduated with a computer science degree, worked in Silicon Valley as a software engineer, and started a profitable consulting company by 26. In comparison, when my parents were my age, they worked 9-5 jobs, one in marketing, the other as an admin assistant, and moonlighted on the weekends. Doesn’t sound so crazy, right?

Like many other Millennials, I find myself materialistically behind what my parents did. After looking up some financial data, I found that the cost for a car, house, and other items have risen faster than household income, making Millennial’s purchasing power weaker than previous generations.

Don’t believe me? Take a look a some of these startling facts:

When understanding whether or not times are getting financially harder, it’s important to get a benchmark. Let’s use median household income.

According to the US census bureau, in 1980, the median household income was: $16,122.19. Adjusting that with inflation using this inflation calculator you get $49,131.

Comparing the inflated 1980 and today, there is a 26.5% increase in household income! On first glance that looks great. People are earning more money, which means people should be wealthier than previous generations. However, if the cost of everything outpaces the income level, then the income bump becomes neglect.

To set the record straight, if buying a household, car, and other items has increased more than 26.5%, then the Millennial generation has it harder than previous generations. If commodities don’t increase as much, then Millennials have it easier.

Below is the summary of the baseline:

So what if you want to buy a house right now? What is the median price home price? Drum roll please!

Wait, does that mean it’s easier to buy houses now than previous generations?

Well, yes and no.

For some areas of the US, that is true. Others, it’s not. My parents bought a house in Silicon Valley, and today, that town boasts a $1,850,000 median sale price. That is probably a pipe dream for me that requires starting the next SnapChat and getting bought out. The reality is that real estate hot spots dramatically increase faster than inflation, making it more difficult for Millennials that like to work in cities to buy a house.

For instance, here is the Facebook Effect in Silicon Valley, where FB opened up headquarters in Menlo Park, and how it dramatically influenced local real estate prices. 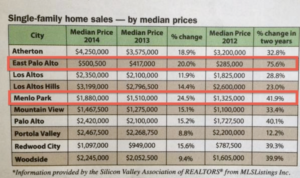 This easily outpaces inflation. Hence, Millennials, including myself, will find it more difficult to buy houses in hot spots than previous generations. This is why many younger employees who do buy homes end up commuting one, sometimes two, hours from a less expensive area to afford the prices.

That’s probably why, according to Edmunds’ 2016 lease report, 34.2% of millennials lease rather than buy. They are just that much more expensive, and to keep up with Instagram reality, financial shortcuts are needed.

By far, my favorite and one that I personally had to pay off when I graduated college. Though, how difficult was it for my parents growing up? Did they have to face the same challenges, and if so, to what degree?

Well, National Center for Education Statistics states that the average tuition in 1980 was roughly $3,101, with inflation, $8,883.

Looking at today’s average tuition fees, $23,835 is over double what it was in 1980. Hence, Mom and Dad got it easy going to college. In fact, student fees have grown 268%. No wonder Millennials are having issues.

This is one of the first big payments that I personally had to pay off when graduating. Having debt at this point, where you cannot declare bankruptcy, essentially burdens down a lot of new graduates and is leading to one of the most interesting education crises in the history of the country. I personally know many Millennials with high five-figure and some six-figure student loan debt. Some of them chip away at the goliath, while others just give up and only pay the interest.

Sometimes, complaining that times are harder is an easy way of getting out of being proactive. However, I wanted to dig into this a bit further and see if living in 1980 was really that much easier financially. Turns out, it was.

After comparing what my parents went through to current financial realities, it became fairly evident that what I and other Millennials face, especially in big cities. We are less likely to get a house, buy a car and instead prefer to take Uber and Lyft everywhere. This could also attest to the idea that Millennials living in their parent’s home more than previous generations might be due to financial burden rather than a prolonging adolescence.

Sorry Mom and Dad, looks like you are going to have to wait for me to move in down the street.