Millennials killed Toy R Us, AppleBee’s and Hotels. Now they are coming for the NBA 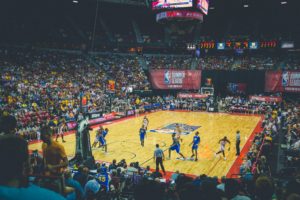 When I first heard people complaining about Millennials killing industries, I thought it was older generations complaining about the direction change in the market and it was nothing to worry about. However, after some research looking through much innovation, many industries that were older generation nostalgia are disappearing faster than ever before. Technology is to blame, as an a technology user I am also to blame.

As a Millennial many of the changes and Millennial killings make sense.

Places such as Toy R Us, I can go on Amazon for a better deal than to walk in the store. Plus who likes to get trampled in stores doing last minute Christmas shopping? What about AppleBee’s? I do not want a sit down meal and would like the option of takeout. Hotels? Airbnb is an option or a dozen other more price friendly alternatives.

But when I heard about the NBA being in trouble, my stomach sank. I haven’t been much of an basketball fan growing up other than spending hundreds of dollars on Air Jordan and competing in some travel basketball teams, but I didn’t play much in high school. As an adult, I don’t follow the NBA much but many of my friends do which inspires my concern.

What does this mean for the NBA?

The Heart of the Issue

Social Media. In the past, the NBA has benefited from the traditional TV model, however, with social media on the rise, the NBA has gotten into some trouble. As AdAge put it “traditional pay-TV bundles that their parents continue to prop up with their monthly payments. The impact on the NBA’s media partners is striking; in the last eight years, ESPN has lost north of 14 million linear subs, while TNT has lost its footing in nearly 11 million households.” A devastating blow that used to benefit from the straight forward model, but Millennials are not paying for basic cable.

Even though not as many Millennials are paying for basic cable, many of them are still tuning into games. How does the NBA know? Ratings are still up, but doing a quick look at social media, you will see hundreds and thousands of views in each game with bite sized clips. Often, these clips infringe on copyright which cause them to subsequently be taken down. Its a game of posting content then shutting the content down.

Unfortunately, the free world of social media and the paying world of the NBA need to compromise where fans can get the footage that they want while the NBA can stay profitable.

The first alternative consists of charging users to watch NBA content for a discounted rate through social media. If someone wants to see game content real time, they are able to click, pay a small premium and view the content in an instant. Many of these can be through bite sized content. However, in 2014, TNT, ESPN and ABC renewed their contracts with the league in a 9 year, $24 billion extension which makes this first alternative a distant reality.

The second alternative, is shaving down the number of games played from 84 to 72 and having a mid season single elimination tournament. Similar to the All-Star game to add an extra flair, however, with too many bells and whistles you devalue the traditional events.

Lets go to the bar to watch the game.

Traditionally, people would head out together to some common place and watch a game. Now, Millennials tend to view the game in more of an solitude style where they view the game on their phone, then message their friends about it. Unfortunately, this decrease in community causes many industries to struggle to stay alive such as sports bars.

As social media and the world of technology put pressure on the NBA to stay alive, we will need to sit in the stadium of innovation and watch this ordeal play out. Would the NBA open up micro content opportunities where people can stream the game? Or will the NBA stay lock step and put its head in the sand until it’s too late? Or will they innovate and find a better solution to stay alive?

It’s hard to say right now, but I would prefer that the NBA stay alive so Millennials don’t get another industry added to their kill list.