7 Blind Spots that you Need to be Aware of 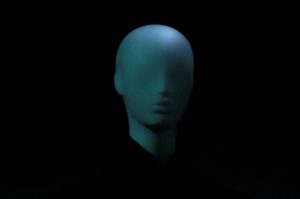 Earlier this week, I wrote a post on six common mistakes that people make in decision making. This particular post, there are seven entirely new loopholes that people have in their minds when they are going through the decision making process. If you haven’t read the first part, I highly suggest you give a look before you dive into these next seven loopholes.

Blind Spot 1: Failing to take into account the mean when drawing future projections

Your past quarter sales team exceeding the past quarter goal by a whole 25%. Congrats! Your boss, team and yourself are extremely excited about the groundbreaking results. Next week, there is an executive meeting where the company discusses the next quarter goals. Your homework is to put together the projections for the next quarter, but you want to be respectful to your team and not set too aggressive of a goal. In fact, the team just destroyed the past quarter so you think it would best to set the bar to what they hit this past quarter and leave it at that. What are the chances that your team will hit the conservative goal you set?

If you stated easily then you got hit by the blind side. This question tends to confuse a lot of people because they consider that the team has learned in the past quarter making them more confident, efficient and strategic so setting a conservative goal should be an easy accomplishment. However, let’s provide a different example to show the fault in this thinking.

Imagine its the 1990s during Michael Jordan’s prime and he just had a 80 point game! His all time best and an NBA record! What would be the probability that he would have a 90 point game the following week? Probably not very unlikely because that is the best he has ever done! But why would the manager in the above example think its conservative to set the bar at above the team’s personal record? It does not make sense for the athlete situation, but people make this mistake all the time in business.

The problem is that there is a law called ‘regression-to-the-mean effect’ and we don’t usually think that law applies for more ‘normal’ experiences. For instance, a team doing 25% in a quarter versus a professional setting a record. Make sure you time into account history and if you are not being susceptible to the ‘regression-to-the-mean’ when setting another goal. It can catch you by the blind side. 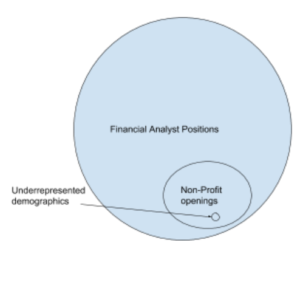 Which do you choose?

When people answer this question, they usually say 1,3,2 as probability versus 1,2,3 which is the correct answer. Why would 1,2,3 be the correct answer? When you look at the diagram to the left, you will notice that a financial analyst position at a non-profit is a subset of all financial analyst positions. There is a probability that your nephew does not work at a non-profit. Hence, you are better off going with 1,2,3 probability wise versus 1,3,2.

When introducing the small piece of information that your nephew is a human activist, you assume that they will be more likely to work in a a non-profit which distort your ability to notice that one is a subset of the other.

It’s a big moment in the company, you were just approached by a large corporation to be acquired. You hear from a friend that the company that they worked at, that had roughly the same amount of employees sold for $50 million dollars. When the initial offering came across your desk from the company wanting to acquire you,stated acquiring $10 million. Immediately you feel let down and check through all of the paperwork and find they did a great job valuing the company’s assets. Why were you originally let down the paperwork first came across your desk?

Have you ever noticed in stores that when an item is for sale, it’s usually a crazy high price? Well, setting a high price and crossing it out is a practice of anchoring. When people hear an initial starting point or anchor they hone in on that number and move relative to the number. It’s very similar to how overcoming initial impressions is a very hard thing to do.

The anchor in this situation was the tip from your friend about another company anchoring you at $50 million. After hearing the offer from the larger company, you compared that to the lower one making the difference pretty extreme. Whenever you evaluate a number, make sure your expectation is not being influenced by a psychological anchor.

During the company’s annual meeting you reviewed the past projections and results of each team. As each manager around the table showed their team results, you consistently notice that each team tended to overshoot deadlines. Did they not have enough information about what was happening in each of their territories? Were they trying to influence the stock prices. Each one of the managers had MBA and had an abundance of materials to make proper projections. Is there something else at play here?

It turns out there is. For some strange reason, people tend to predict groups of events working out in higher probability than events not working out. For instance, for a project to go successfully, many parts need to work in synchronicity for the project to be done on time versus for the same amount of events not working. A common example of this occurring is in academy when graduate students estimate how much time it will take them to finish completing their dissertations. More often than not, they heavily underestimate the time they will take to finish their dissertation leading to a phenomena commonly referred as “underestimating disjunctive estimates.”

During highly complex projects, many things can go wrong and our abilities to anticipate these occurrences is quite flawed. In other words, we are overly optimistic.

Your assistant finally finishes the major project that you have been waiting weeks for and you are open up it with immense curiosity. During the past couple of weeks, they did an in depth analysis of all of the competitors in the market. Finding everything from their major accounts to how they generate traffic on the web, the assistant left one thing for you to fill in- valuations. In a column on the left part of the page, there are a list of competitors in your market. For each row, you write a range of what you think those companies are worth and your confidence in that range. Several months later you get some IP from a partner that reveals all the valuations of your competitors. Turns out you were 50% wrong with your originally findings, the valuations weren’t even in your ranges. Why did this happen?

As much as this seems as a hypothetical example, people have a very difficult time lowering their confidence in situations where they lack substantial evidence. In fact, in overconfidence literature, yes there is such a thing, they found that people tend to be the most overconfident of the correctness of their answers when asked to respond to questions of moderate to extreme difficulty. Unfortunately, it should be the opposite. In addition, Sniezek and Henry (1989) found that “in general, groups make more accurate judgements that individuals.” Many researchers argue that people have an overabundance of confidence in uncertain situations is due to psychologically anchoring and where we place our confidence ranges.

Make sure when you are estimating uncertain events to get a second opinion because we tend to become overconfident in our individual decisions.

There it is, the dream candidate. Sitting right across from you, someone with perfect credentials is extremely excited about working for your company. They graduated from an ivy league and they are in your salary bracket for the open position. As protocol, Human Resources suggests to call the references that the candidate provides. After talking to three references, all were non-enthusiastic about the candidate.You assume they were not very understanding and consequently you make an excuse for each person’s reasoning and you hire the candidate. Turns out the references were right. Why was it so hard to listen to the candidate’s reference?

This blind spot is often referred to as confirmation bias. Once, someone has made up their mind about a candidate, they will look for everything in their environment to further confirm their original hypothesis. People are rarely able to test multiple hypothesis by weighing out multiple perspectives on a subject. They usually gravitate towards one opinion and stick to that.

The unfortunate side effect to this blind spot is how it effectively builds yes cultures. In other words, cultures where everyone confirms the executives decision making. No one plays devils advocate and points out contradictory views. In response to this effect, some presidents have selected cabinets that have completely opposing views to avoid falling prey to the confirmation trap.

When evaluating something new, maybe it’s a new car purchase, house, college, or you are hiring a new employee, looking for evidence that contradicts your original perspective is a great way to avoid the confirmation trap.

Blind Spot 7: The Curse of Hindsight

This is going to be huge. Two contracts both with exclusivity agreements with some of the largest accounts in company history. The only problem is you can only choose one of them. In order to make this decision, you ask the board, you survey the managers, and you even call up your parents to ask them which one you should pick. After much deliberation, you decide on one. Unfortunately, six months later, you found out that new your account is a total bust. ‘I knew it’ you think. I should have choose the other one.

Often, when we look back in retrospect we believe we knew the right answer. Whether it’s deciding between accounts, different candidates, or accepting a job offer. However, we fail to understand that we didn’t have the same amount of knowledge when we originally made the decision.

The takeaway, don’t kick yourself in the butt if you think you could have done it better in the past.