What is the Difference Between Generation Y and Millennial? 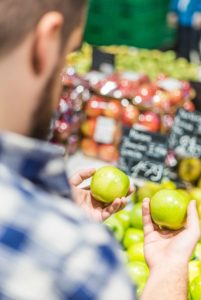 So what is the difference between Millennials and Generation Y?

Are they the same thing? But if they are, why are there two different names?

These questions always drive me crazy when I read about generations in the media, so I decided to write this article to set the record straight. Often, people use them interchangeably without ever considering the difference. However, if we think about it, who would make two names for the same thing.

The problem is that Generation Y and Millennial are not the same!

How Generations Get Labeled

Okay, I am going to let you in on a dirty secret. You know the term ‘expert’? How do you think someone acquires that title? Do you hire a judge and have to submit paperwork to be officially called an expert?

People usually just decide they are an expert and run with it. If they have a good enough background and seem to make enough sense, people just accept it.

The same thing is true with generation labels. If the individuals who coin the term, presents good enough data, and do some marketing magic, they will eventually get their term adopted.

When I give presentations, people often think that the government’s Census Bureau does the research on generations. However, that is not the case.

Generations are not coined by the Census Bureau!!! They are created by individual parties!

Yes, that means research can be skewed and distorted to fit a business agenda, because there is no ‘generation’ police. This is why with generation stereotypes are inconsistent with the individual. The ‘expert’ who wins the battle for the generation name, gets to be the source for generation information, leading to backlinks, interview requests and consulting gigs. Hence, there is financial incentive to be the originator. 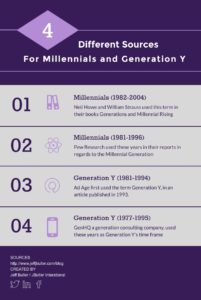 The different sources polarized there term in different ways. Sometimes it is an article that goes viral. Other times, it is a breakthrough book explaining a generation phenomena. In every case, the expert throws their term into the sea of the business world and finds out if it will be accepted.

What is More Commonly Used Between Generation Y and Millennial?

Interestingly enough, Wyoming likes to use the term Millennial 20 times more than the Generation Y. Who would have thought!!!

Are the Stereotypes Different For Millennial and Generation Y?

Not as far as I can tell. They look fairly similar when considering the literature. However, the less credible the source, you will tend to get a lot more polarizing data. For instance, none of the sources in this article talk about avocado sandwiches. That was a term caught on in 2016 after a writer criticized Millennials for spending too much on avocado sandwiches.

The culture stereotypes are often different from the actual generation research.

The avocado toast vs. home-buying dilemma—illustrated with avocados from CNBC.

So What Source Should I Use For Generation Timelines?

I would suggest using the term Millennials and use Pew Research (1981-1996) for the generation years.

Pew Research has the most extensive research and it is also the most widely accepted in the corporate world.