Why ‘Monopoly for Millennials’ Was Such a Genius Marketing Strategy 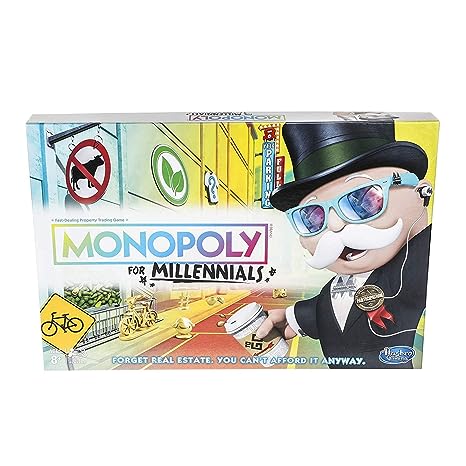 Game variations: Instead of buying property the game encourages places to gain Experiences. The player with the most Experience at the end wins the game.

Millennials (born 1980-1996) are currently the butt of every generation joke…that is until they are old enough until Generation Z (born 1995-2012) takes their place. Due to this polarization, a lot of companies have used the Millennial term to brand products. As everything in life, some were able to do it better than others. When choosing a polarizing topic, the brand walks a tightrope, if it does well, they will be thrown in the upward direction. If the plan does not go so well, they will join the graveyard of offensive brands. In this post we will be covering the infamous ‘Monopoly for Millennials’ game and how it was such a genius strategy in targeting board game customers.

To be completely honest, I thought that this game was going to be a total flop. There is a lot going against Hasbro (creator of Monopoly for Millennials) to make this move. First off, they are making a game about Millennials, which is stereotypically a generation who is famous for being offended at the smallest things. Especially, if it’s in reference to them. On top of that, Monopoly is not a go-to game for people who are Millennials who are likely to prefer more strategy-based games, so what is the point of getting their attention if they are not the target demographic? Three, if Hasbro uses the wrong terminology in the game, they can open themselves up to a lot of social media ridicule that can hurt the company from a public relations perspective.

With all three of these obstacles up against Hasbro, were they able to live up to their ‘Monopoly for Millennials’ titled game?

Breaking Down Monopoly for Millennials

The answer is YES and here is why: This version of monopoly completely shifted from the standard version of monopoly, changing the traditional game dynamics in order to match the Millennial lifestyle. Whether this was an intentionally polarizing business move, or targeted marketing plan that worked a bit too well- they successfully hit the Millennial lifestyle on the head. Even as a Millennial, I had to laugh when I saw some of the game suggestions:

As a Millennial, they were spot on in terms and references. Good thing their product development team did their research. If they weren’t average, the mistake would have totally collapsed the product.

Many outlets have covered this story about Hasbro creating a game about Millennials:

These stories usually fall into two buckets, one, they see the creative element that the game has, consequently praising Hasbro for a quick laugh. The other side is, the author critiques the game for being stereotyping and to a degree, offensive. I wonder if the critical writers were Millennials.

Here is where it’s a perfect story- if someone critiques the game finding it ‘offensive’ they play into the stereotypical Millennial. From here, the media can jump on this further pointing out the irony of the outlet playing into the generalization. Or, if someone does not find it offensive, the media outlet can be criticized for not being as critical about stereotyping a whole generation.

While this circular storm takes places, Hasbro is in the background cashing in. The game sold out past current inventory with their initial launch week according to Vox.

While the game hit headlines, several different demographics emerged to buy the game:

Normally when a Monopoly game is released that is not polarizing, it would fall into the first bucket ‘people who like Monopoly’. However, by leveraging its controversial nature, the company successful opened itself up to several other buyers. Either the ones that are interested in the fuss, or Millennials who are curious to see the accuracy of the game. Essentially, Hasbro reached horizontal markets by adding a slight twist to their original product.

While the game slowed down in purchases, its initial popularity was spectacular as you can see this Google Trends graph.

Moral of the Story

By adding a bit of polarization to a product, you can effectively garner more attention. However, for this to work successfully, the product itself must have enough value to deliver to its promise. Reason being, if you attract horizontal markets and it’s a poor product, you will lose the polarization game and hurt the brand image. However, if the game delivers, you will have successfully acquired new brand advocates. The genius behind this marketing strategy was seeing the using the infamous generation term Millennial, as a brand concept to open up new markets.