Xennials- They Are Not Generation Y or Millennials, So Who Are They?

When reading through generation articles, you will probably come across the generation terms like Generation X, Generation Y, Millennials, Baby Boomers, but occasionally you have a curveball thrown your way like Xennials. But what is a Xennial? Is Xennial another name for a new generation? And if so, should people be concerned?

We will be answering all of those questions in this post. Essentially pulling back the curtain on what Xennials are, and should you even care. Each generation has its own time frame period, and many generation sources, coin different times for each generation. To add to the overall complexity, there are synonyms for each generation and micro-generation. In other words, your confusion is understandable. Heck, I talk about generations all the time to companies (such as Google, Amazon, LinkedIn) and sometimes I get them mixed up.

Okay, so what is Xennial- let’s set the record straight:

Xennial pertains to the group of people born between the late 1970s to mid-1980s. This part of history is referred to a micro-generation which also won the titles of Oregon Trail Generation or Generation Catalano.

Why the obscure titles for this generation? We will get to that later.

And for the micro-generation term, that just means it’s shorter than the traditional 15-20 year period for a generation. Instead, it’s usually around 3-7 years.

The term Xennial was first used by a writer for Good Magazine, that they literally, “made up the term because they didn’t fit into the traditional Millennial or Generation X stereotypes.” The author claims a position as a generation misfit, and coins that there is a generation between Generation X and Millennial which is called Xennials.

The author goes on to state that Xennials are different than Millennials because they were at:

Why the Oregon Trail Name?

It turns out that the Oregon Trail name is referencing a game released in 1985 called Oregon Trail. The game was developed by the Minnesota Education Computing Consortium, where players can participate as settlers traveling from Missouri to Oregon during the 1800s. In the game, players are taught about the harsh realities that the settlers had to endure in order to successfully traverse the midwest terrains.

This game was a wild success, selling an unbelievable 65 million copies. However, where this game ties into the generational term, is that this game was used extensively in elementary schools to teach children about the western settlers. Hence, groups of young students grew up playing this game, which overlaps the same period that relates to the Xennial generation. Keep in mind, it was so widely used that most children from this period recognize the name.

It a sort of bizarre way, a nostalgic childhood video game, became associated with another generational stereotype. Even weirder, it was a response to rationalize people who were born between Generation X and Millennial who don’t match the stereotype. Crazy how things get tied up together.

But Why Were Xennials Flooded With This Game?

Turns out that most schools during that period were buying Apple IIs, and the games were preloaded from our old gaming company friends Minnesota Education Computing Consortium. During that period, schools heavily invested in computers believing it would be a great way to help students learn more effectively, which also led to the rapid spreading of the generation’s favorite video game.

Smithsonian Magazine even recalled that “‘MECC’s goal was on putting a computer in the hands of every K-12 student in Minnesota,’ says Dale LaFrenz, MECC co-founder and CEO from 1985 to 1996.” Hence, this was a deliberate action to associate the game with the K-12 learning setting. So much for keeping students focused in class. 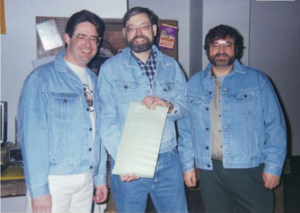 Why the Catalano Name?

In an article in Slato Magazine, the editor, in an attempt to get to the bottom of this generation found that “Jared Leto’s Jordan Catalano was the main character in the 1994-95 ABC series My So-Called Life, a show that starred Claire Danes as Angela Chase.” Again, what we see here is a technology that the generation spent a good amount of time with becomes associated with the generation.

Is Knowing About Xennials Helpful For the Workplace?

In my humble opinion- no.

Here is why- a lot of times people create different ‘micro-generations’ in an attempt to explain the difference in behavior for a generation. For instance, let’s say that you are apart of the Millennial generation (born 1980-1996), and you don’t think the stereotypes match with you or your friends. To make sense of each other’s behavior you coin a new generation for a smaller period as the proposed solution. However, that is not very helpful. Generations are by their nature, not reliant on predicting individual behavior.

The attempt to create a different generation, as in splitting the time frame period from 15 years to 3-5 years is not very effective. Unfortunately, generations are a worse form of horoscopes because they span a greater period of time. So if you don’t believe in horoscopes, then you shouldn’t believe in generation stereotypes. In a weird way, they are always true, but often they are more wrong than right.

Focus on the individual instead of the generation and you will be pretty well off.