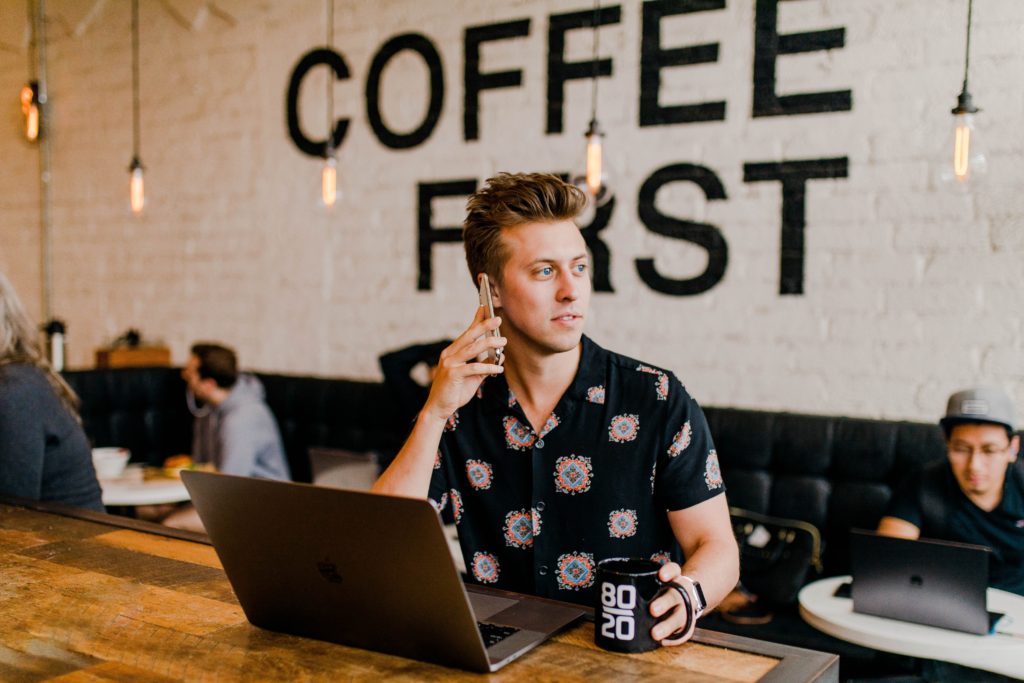 While everyone wants a great boss you would be surprised by how many people actually put up with bad bosses for the wrong reasons. Maybe they were transfixed on a great company and neglected the red flags during the interview process. Or maybe, they switch roles at a company looking for a career opportunity and found out the microculture of the team they joined was toxic. Whatever the reason may be, once you have a bad boss, everything else begins to go downhill.

Along with the same thought, Millennials have notoriously asked for better bosses in the workplace. In Gallup’s research How Millennials Want to Work And Live, 71% of Millennials are not engaged in the workplace. Society of Human Resources, built on this point finding that “engagement levels are largely in direct control or significantly influenced by the employee’s manager.” With that said, how far would Millennials go to get a good boss in the workplace? Would they work at a smaller company? Forgo certain benefits? Move out of their city? Receive less pay?

According to USA Today, Millennials are willing to take less pay for a better workplace. And what is one of the most impactful aspects of the workplace – the boss.

Below are five reasons why Millennials want a great boss in the workplace:

1 .Relationships Are More Important Than Pay 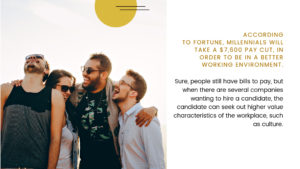 According to Fortune, Millennials will take a $7,600 pay cut, in order to be in a better working environment. Specifically, having better relationships where they work. However, given the current job market, this comes as no surprise. With the economy reflecting a candidate’s market, pay naturally becomes a less important attribute to seek out in an employer. Sure, people still have bills to pay, but when there are several companies wanting to hire a candidate, the candidate can seek out higher value characteristics of the workplace, such as culture. 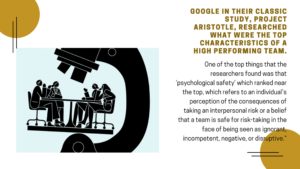 Google in their classic study, Project Aristotle, researched what were the top characteristics of a high performing team. Oddly enough, one of the top things that the researchers found was that ‘psychological safety’ which ranked near the top. In their words, “psychological safety refers to an individual’s perception of the consequences of taking an interpersonal risk or a belief that a team is safe for risk-taking in the face of being seen as ignorant, incompetent, negative, or disruptive.”


How do you think that the source of psychological safety manifests itself on the team? The biggest proponent is the manager. Whether its a leadership perspective that creates this environment, or the manager’s ability to make someone feel safe, managers play an enormous role environment where people feel safe.

The connection with Millennials, the study was done around the time where Google’s average age in the workplace was 29 years old [top end of a Millennial then]. Hence, most Millennials who surveyed and studied to uncover what the want in a high performing team. 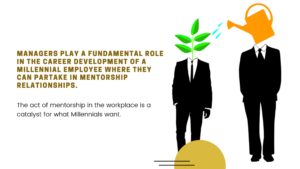 Managers play a fundamental role in the career development of a Millennial employee where they can partake in mentorship relationships. The act of mentorship in the workplace is a catalyst for what Millennials want says Emily Foote. In addition, she says, “they want opportunities to learn, develop new skill sets, and grow into leaders.” While this might seem like a superfluous want, it might be surprising to find that mentoring programs have been shown to increase employee retention. Due to a lot of younger employees are looking for, it should not come at a surprise. Give them what they are looking for, and they will stay. 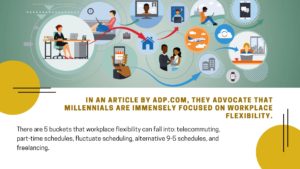 In an article by ADP.com, they advocate that Millennials are immensely focused on workplace flexible. There are 5 buckets that workplace flexibility can fall into: telecommuting, part-time schedules, fluctuate scheduling, alternative 9-5 schedules, and freelancing. From technology advancements, people are able to stay plugged into the workplace longer than ever before. With these advancements, flexible work options are becoming an expectation, rather than a benefit.

Now, if you want to ask for a flexible schedule, who do you usually go to? The boss. In the beginning its Human Resources for putting the policies in place, but for the sake of argument, let’s assume that HR already took care of this. If a Millennials wants to partake in this work style, the manager must be able to manage effectively when these types of arrangements, which can often lead to many struggles with micromanagement. 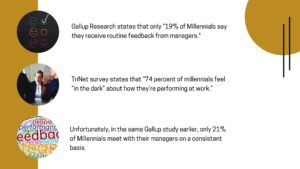 Gallup Research states that only “19% of Millennials say they receive routine feedback from managers”, while a TriNet survey states that “74 percent of millennials feel “in the dark” about how they’re performing at work.” Point being, there is a huge gap between the feedback Millennials want and are getting. But where does this take place? Where can Millennials receive the feedback to lead them out of the proverbially, and hopefully not literal, dark? Usually, this can be done during one on one meetings. Unfortunately, in the same Gallup study earlier, only 21% of Millennials meet with their managers on a consistent basis. This is one of the lowest hanging fruits that so many managers fail to implement, but it can easily close the gap.