How Can Companies Avoid Workplace Gossip? 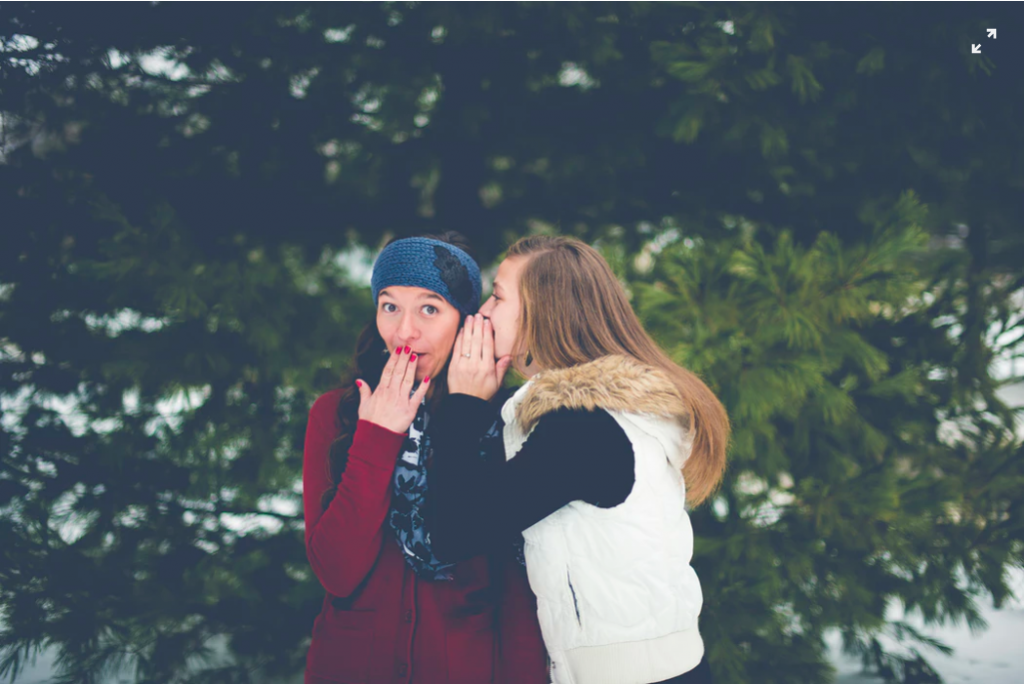 Personally, I have been burned emotionally to a crisp from workplace gossip.

All that you need to know that is there was some information that was spread about me in the workplace a few ago which consisted of something outside the job. No one asked me personally what was going on. But the lack of communication wasn’t the worst thing; the worst thing was that someone who I thought was a good friend ended up being the source of the problem. They were constantly adding fuel to a rumor going to my manager and other people in the company consistently twisting the truth.

I ended up finding out from my manager who told me this had been going on for months. Fortunately, he consistently tried to put the flame out which is why I didn’t find out much later. Not only did it burn to know that people were talking behind my back, but a place where I felt safe turned into a hell hole in a split second. The place where I spent most of my waking hours became a hub for distrust and paranoia.

Has this happened to you? 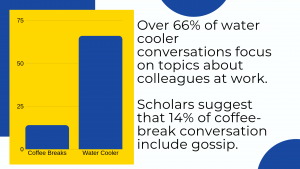 Over 66% of water cooler conversations focus on topics about colleagues at work. In addition, Scholars suggest that 14% of coffee-break conversation include gossip. Meaning that once a week during your breaks you probably run into a bit of workplace gossip. 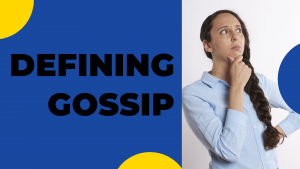 So what is gossip? The dictionary often describes it as “casual or unconstrained conversation or reports about other people, typically involving details that are not confirmed as being true.” People usually enjoy gossip, they get a good laugh, share a secret with someone else and polarize a group. But where the line for gossip? Here are a couple of questions about the conversations you have with coworkers:

STEPS YOU CAN TAKE TO STOP GOSSIP 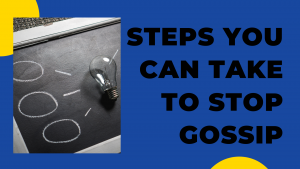 While this seems to span a large number of conversations, it’s important to note there are many easy anecdotes where you can still have ‘fun’ discussion with coworkers. However, in the unlikely occurrence that you end up conversing with a gossiping employee, here are a couple of things you can do to keep your workplace healthy: 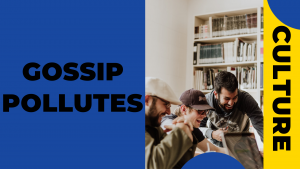 A final thought on the concept of gossip: Gossip can be likened to farmers in the time of crops.

Imagine that each year a group of farmers prepare for the yearly harvest several months in advance. In preparation, they use large equipment to turn dirt, plant crops, and finalize each detail for a lavish harvest. Occasionally, the farmers would accumulate the waste from all of the large vehicles they operated and dump the waste into a lake just outside of town. They continued this habit of work, accumulating and dumping each month before the big harvest. When the big month came, the crops were dead and farmers were left in a panic. “How could this have happened,” they collectively thought. Little did they know that the lake was actually the water supply for their crops. With the continuous pouring of waste, they eventually destroyed the water source for the crop and consequently the big harvest they worked so hard for.

The same truth happens with gossip, it may feel good to get it out of your system by talking to a coworker about gossip but it eventually pollutes the culture. If too much gossip happens, the culture will decay and you will end up with what the farmers had a dead culture.