10 Great Resignation Statistics That You Need to Know

Unless you have been under a rock, or in this case, a series of N95 masks, you probably heard of the Great Resignation statistics.. This trend is usually considered a time where people are quitting their jobs after their pandemic and finding another that better fits their ambitions. As a business owner, I wasn’t affected by the Great Resignation, which piqued my interest in what was happening in the post pandemic working world. Hence, I sought out research and compiled statistics that shaped the Great Resignation.

Hopefully you find these statistics helpful and thought provoking into the post pandemic workplace.

Statistic #1: When Did the Term ‘The Great Resignation’ Become Viral?

About a year after the pandemic became a central focus for the United States, Anthony Klotz, an associate professor at Texas A&M coined the term in order to explain the workplace shift that took place after the pandemic. In an article published in Bloomberg, he discussed how to quit your job during the pandemic and first used the phrase ‘The Great Resignation’.

According to Klotz, four trends encourage employees to switch jobs:

Interestingly enough, Klotz followed his advice and recently stepped down from the associate professor position at Texas A&M in May 2022. It’s always nice to see people practice what they preach.

Statistic #2: How Many People Have Cited ‘The Great Resignation’?

Statistic #3: Which Industries Are Hit the Hardest?

Answer: Hotels and Restaurants, 9% of all positions are open. (February 2022 source)

Here are few other honorable mentions:

In 2022 the U.S. Department of Education has announced that there is a bus driver shortage.

A UC San Francisco study from 2021 found that line cooks had the highest risk of mortality from the pandemic, increasing by a staggering 60% since the onset of the pandemic.

From the exposure of COVID-19, many professionals are leaving the field due to association with mass death.

Experts theorize that the jobs requiring in person presence attract less candidates due to work flexibility and commute costs. In addition, it seems that the increasing gas prices are also another great reason why employees want to work remotely.

Statistic #4: Who Is Quitting During the Great Resignation?

This research was done by Pew Research in a survey format asking why people left their current positions. What is fascinating about the reasoning behind people leaving, was probably the same reason that people first joined the work- payment. While these finds are interesting, they don’t pose much actionable items for the working world except for having better workplace flexibility.

Statistic #5: Which State Has Been Hit the Hardest? 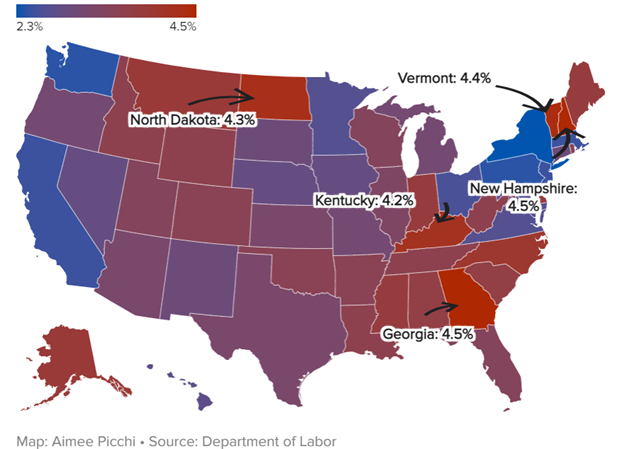 While workers have switched jobs to find higher pay, others according to the Economic Innovation Group are taking stabs at trying to start their own businesses. However, this should not come as a surprise as since the pandemic started there has been a 53% increase in business filings. Only Pennsylvania and Colorado have seen a decrease in quit rates.

Statistic #6: Which Country Has Been the Most Affected By the Great Resignation?

Some experiments argue that in Europe, government payments were allowed if workers held an employment contract, and since the United States did not, the unemployment rate jumped to 3% to 14% in just a few months. In Europe, on the other hand, this increase was attenuated because government payments required workers to hold an employment contract. This has had thought to have a positive effect because it keeps people away from inactivity.

Statistic #7: Biggest Reason Why People Quit During the Great Resignation

Statistic #8: How Many People Quit During the Great Resignation. 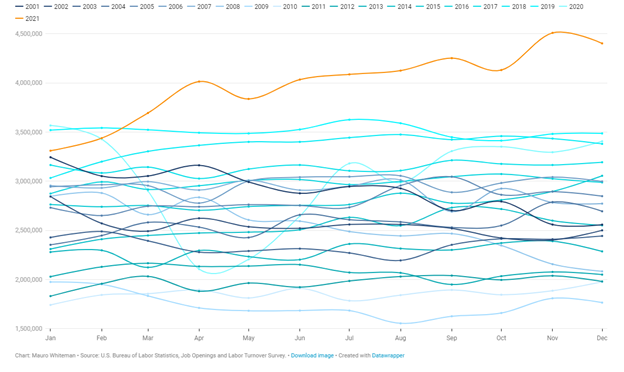 Statistic #9: What Percentage of Companies Plan to Stay Remote?

In 2022, 16% of companies in the world are 100% remote while 44% of companies don’t allow remote work. However, these Great Resignation statistics will slowly adjust overtime.

Statistic #10: When Do Experts Expect The Great Resignation Will End?

Experts [McMullen] suggest that “If inflation continues, we’re looking at a market contraction that could weaken job seekers’ advantage, because the higher cost of living will definitely contribute to them having to take a job faster than they otherwise would have,” she says.