When Elon Musk sent two emails on May 31, 2022 about restricting remote work privileges, the working world became split into two categories: rebuking the restrictions warning it will cause turnover and others that supported the change. Below are the emails for your reference that comment on disadvantages of remote work. Note, that the spelling error in the subject title was actually how it was sent.

Anyone who wishes to do remote work must be in the office for a minimum (and I mean *minimum*) of 40 hours per week or depart Tesla. This is less than we ask of factory workers.

If there are particularly exceptional contributors for whom this is impossible, I will review and approve those exceptions directly.

Moreover, the “office” must be a main Tesla office, not a remote branch office unrelated to the job duties, for example being responsible for Fremont factory human relations, but having your office be in another state.

Subject: To be super clear

Everyone at Tesla is required to spend a minimum of 40 hours in the office per week. Moreover, the office must be where your actual colleagues are located, not some remote pseudo office. If you don’t show up, we will assume you have resigned.

The more senior you are, the more visible must be your presence. That is why I lived in the factory so much – so that those on the line could see me working alongside them. If I had not done that, Tesla would long ago have gone bankrupt.

There are of course companies that don’t require this, but when was the last time they shipped a great new product? It’s been a while.

Tesla has and will create and actually manufacture the most exciting and meaningful products of any company on Earth. This will not happen by phoning it in.

As a business owner who has been operating a remote company for over 5 years, I had to really sit back and reflect on why these emails were sent out. Since COVID-19, a large amount of the internet has been actively pushing the benefits of remote work, and yet, many offices have requested their remote staff to return in person.

As the pandemic began to wane, I did not take these company requests seriously because I thought it was a corporate reaction to consistently wanting control over their staff. However, when Musk sent out this request I knew there was something evidently wrong with remote work. Love him or hate him, he has one of the most impressive business resumes known in the business world ranging from PayPal, SpaceX, Tesla, etc. Hence, it’s very unlikely for someone with that record to make a major mistake.

In this short article, I want to highlight a few major disadvantages of remote work that every remote leader should know. These disadvantages, in my opinion, are keeping the majority of work that can be remote, in person.

Disadvantage of Remote Work 1: The Power of Presence

During March 2020 in the early pandemic stages, the United States had a swath of in person events, company meetings, reunions, graduations all pivoted and went digital. As the country began to adjust to this new meeting state, people continuously talked about connection specifically being ‘disconnected’. Soon, depression spikes, and mental health became a fundamental focus of America appearing on media headlines nearly everyday. In addition, a wave of writers began researching mental health more extensively writing various books on how to overcome loneliness and feeling disconnected. I actually know a few people who jumped on this bandwagon that knocked out writing a book about mental health during the pandemic when their professional background had nothing to do with the content.

One might make the argument that the depression spikes and mental health concerns were attributed to being locked up in your home for months on end which is understandable. However, when the pandemic became less rampant, why did schools prefer their kids to be in person schools, managers requesting their staff to be back in office, or attendees traveling to go to conferences when they risk getting sick? The technology infrastructure was already in place and able to support people communicate remotely, why go back when people could prove they could handle the digital experience. The virtual world has an immense amount of benefits- zero commute, low attire expectations, and freedom to do other tasks during meetings and yet, people overwhelmingly prefer to be in person. Why?

Could Context be the Answer? 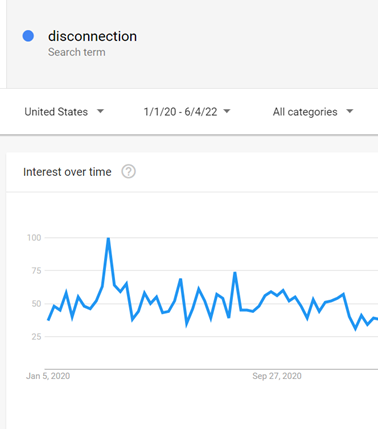 A large number of people have had the argument that in person presence allows participants to read more body language cues that provide context on what someone is implying. But if digital technology better captured body language cues and nuanced gestures would people prefer connecting through the digital plane than in person. Mark Zuckerberg, in the announcement of Meta’s new Virtual Reality, claimed that they will strive to improve technology to help sensory differences become almost indistinguishable from reality so this reality is currently being pursued. Hence, very soon when interacting virtually there could be enough sensory power that people prefer digital connection over in person connection due to picking up more body language and nuanced cues. Going down this dystopian reality, you could easily end up in The Machine Stops by EM Forster reality while people interact with one another through bee hive like rooms and hanging out in person becomes a rarity

Philosophers have the ancient argument contemplating whether this reality is real or not, often referred to as Platonic Realism, plays a significant part in the power of presence. Pushed to the main screens, Matrix directors, The Wachowskis created a computer fabricated reality where people live through the sensory inputs of the computers, almost never being in touch of what is really happening in reality. Tupac, in 2012 was projected in hologram form and performed at Coachella costing anywhere between $100,000-$400,000. While people know that Tupac wasn’t there but it was still regarded as a cool experience. Each of these examples plays with the concept of presence, and being in touch with their current reality. Remote work is an expression of Platonic Realism where people can interact with one another through a sort of digital realism because of technology’s limitations.

Once technology evolves to where it is able to capture these cues to mimic something closer to reality, there is a good chance that work will take place solely in a remote fashion.

Context is the answer to why managers prefer people in person, how that will evolve in the coming years- no one really knows.

Limitations of the Hawthorne Effect in the Remote World

In 1958, Henry A. Landsberger while reviewing Hawthorne studies conducted between 1924 and 1932 at the Hawthorne Works, little did he know that this retrospection would transform the field of organizational psychology. The studies originally concluded that levels of light would change the level of worker productivity, however, through various debates, the original studies turned out to have erroneous conclusions, it appeared more so that the workers had higher levels of productivity when they thought they were being observed rather than it being a lighting optimization. Hence, leading to the Hawthorne Effect.

A Hawthrone Effect is the remote world can range from digital time sheets to have screen recorded. However, having a digital timesheet is nothing compared to having a manager working in the cubicle next to you. Musk alludes to this effect stating, “That is why I lived in the factory so much – so that those on the line could see me working alongside them. If I had not done that, Tesla would long ago have gone bankrupt.” Maybe a simple Hawthorne Effect- the boss leaves and everyone parties. That is why as a leader, I know I could be a much more effective leading person, however, the pros of remote work outweigh the cons such as limited recruitment radius and commute costs.

In many of my lectures, I often talk about the shift that remote managers have to make from in person to remote management by going from ‘Facetime management’ to ‘Performance Driven’ management; however, this transition presents an enormous problem in the remote world. This shift basically means managers need to rely less on being able to see if someone is working physically in front of them, and instead focus on what deliverables they accomplish. In the remote world, managers need to measure more succinctly by ‘what’ people do, or rather simply see them and assume they are working. Managers in order to make this shift, usually add technology where employees can showcase what they are doing during the day so managers don’t need to rely on looking over their shoulder. While this idea on the surface has merit, the whole ‘butts-in-seats’ shift to performance management has immense drawbacks.

Now before we go into why, note that there is an enormous amount of research in favor of people being more productive in the remote setting such as Prodscope who found a 47% increase in productivity from March 2020 to April 2022. Hence, there is much research stating that people are more productive, but they seem to miss an important variable when it comes to productivity.

Many contracts require a certain amount of hours to be worked and one would argue if they can get their work done faster, that is what is important not how many hours they work. However, that is flawed thinking, because employees sign up for a number of hours that are worked and if they get their work done early, then they should work until the end of the shift. If you measure someone by the number of hours, it doesn’t account for deliverables, on the other hand, if you just measure off of performance, they could be way under their potential working.

The Pareto Principle in the workplace states that the square root of your employees get half the amount of work done. Hence, people work at very different rates and you are measuring by the slowest ship there is a lot more what people can be able to do in the time allocated.

What Companies Are Doing in Response

As a manager of remote employees, having remote employees has its dropbacks. I know that I am not able to lead as effectively if I was in person, and measuring productivity presents a new series of challenges. Turns out Elon had a good point, being in person allows him to monitor productivity and connection. If you are currently or will lead a remote team, I suggest being aware of the following: