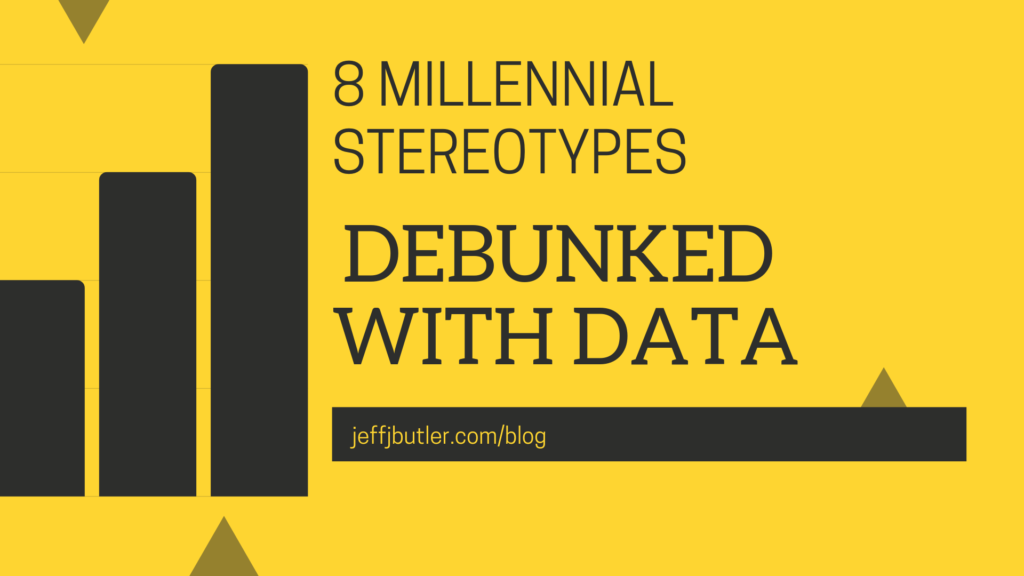 According to what source you reference, the Millennial generation can span anywhere from 15-20 years, between the years 1980-2000. Even though this is such a wide spread in generations, major media outlets have created a series of Millennial stereotypes and stigmas that apply to everyone in these years. However, if you think about it critically, do all ethnicities, political groups, and cultures act the same way in that 15-20 year window? Definitely not, however, media usually pushes messages that attempt to convince the public of so. If it offends you, you talk about it, if you agree with it, you talk about it. It’s a perfect polarizing angle, even though they are often wrong.

With that said, as a Millennial, I decided to take a look at some of the most common Millennial stereotypes and debunk each one with data to set the record straight. Below are a few debunk to help you navigate the constant erroneous data out there: 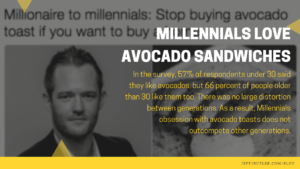 This originally started from the Australian millionaire who in their 60 minute interview said “When I was trying to buy my first home, I wasn’t buying smashed avocado for $19 and four coffees at $4 each.” This quote picked up steam and started to trend even though it was a personal opinion with random numbers. As the stigma caught fire in 2014, Huffington Post decided to test the idea by surveying 1000 people over 19 years old to really see if the Millennials liked avocado toast more than other generations.

In the survey, 57% of respondents under 30 said they like avocados, but 66 percent of people older than 30 like them too. There was no large distortion between generations. As a result, Millennials obsession with avocado toasts does not outcompete other generations. Thanks Huffington Post for doing the leg work on this.

This Millennial stereotype was made popular by the constant social media involvement that Millennials participate in. This kind of behavior led to tons of selfies and the creation of the Selfie Stick. However, this stereotype was further exacerbated when Time Magazine published their infamous article, Millennials The Me Me Me Generation. Their base argument came from “National Institutes of Health; 58% more college students scored higher on a narcissism scale in 2009 than in 1982.” Essentially, juxtaposing how college students scored in narcissism comparing Millennials and Generation Xers. The cause for this increase in narcissism is that “Millennials got so many participation trophies growing up.” The author also noted the consequence of this behavior that many people are familiar with “a recent study showed that 40% believe they should be promoted every two years, regardless of performance.”

While its difficult to debunk a study so thorough, two things for people to keep in mind, is that 1. Baby Boomers were originally referred to as the Me Generation due to their narcissism and 2. According to Psychology Today, not all Millennials are narcissistic. The part where Millennials find this stereotype offensive is believing that all of them are the same way. Try to not make this same mistake. 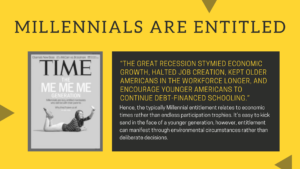 Again, Time Magazine has pushed this stereotype to the front of Western culture even though Baby Boomers have been shown to exercise very similar traits in their 20s. Real Clear Politics dug into this fallacy in their article, The Most Entitled Generation Isn’t Millennials, Its Baby Boomers, finding that “The true cause of this unfortunate situation is clear: it’s the economy.” Generation X born 1961-1981 had unfortunately, faced many different periods of recessions compared to other generations. However, “The Great Recession stymied economic growth, halted job creation, kept older Americans in the workforce longer, and encourage younger Americans to continue debt-financed schooling.”

Hence, the typically Millennial entitlement relates to economic times rather than endless participation trophies. It’s easy to kick sand in the face of a younger generation, however, entitlement can manifest through environmental circumstances rather than deliberate decisions.

4. All Millennials Have Progressive Values 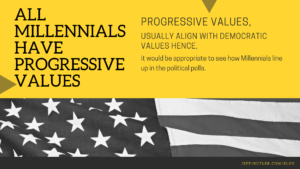 Progressive values, usually align with Democratic values hence, it would be appropriate to see how Millennials line up in the political polls. According to the stereotype Millennials should be mostly democratic. However, a recent poll from Reuters/Ipsos, two online research institutes, polled 16,000 millennials and found that the support Democrats among the Millennial generation dropped to 46%, leading to a total of a 9% drop from two years ago.

On the other hand, looking at the conservative party, according to a 2014 survey by the Pew Research Center found that roughly 34% identify with the Republican Party. Looking at the other Me Generation, Baby Boomers, hold only a slightly liberal lean (46 percent Democratic, 42 percent Republican). Hence, Millennials are a lot more conservative than most people think- not all of them are progressive.

The New York Times in June 2018, published an article titled, The Millennial Socialist Are Coming. In this article, the author claims that a lot of younger Millennials are now becoming active in politics with socialist positions. Policies such as Alexandria Ocasio-Cortez’s that promoted a whopping 70% individual income tax rate in CBS’s 60 Minutes, focused on those earning $10 million or more. While these stories are making headlines and are outlining more of a socialist action, are Millennial socialist ideology really spreading?

John tammy, a columnist at Forbes, pointed out the hole in this issue in his article, 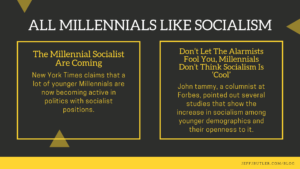 Don’t Let The Alarmists Fool You, Millennials Don’t Think Socialism Is ‘Cool’. In the article, the author pointed out several studies that show the increase in socialism among younger demographics and their openness to it. However, he elegantly reveals the truth of Millennial intention through action:

“While the vibe there is one of lefty indifference to profits, the underlying reality is one of bloodless focus on nosebleed returns. If its inhabitants didn’t care about thick profit margins and getting rich, businesses there would never die. Except that bankruptcy is the norm. Those Valley types in the Che Guevara t-shirts are posing. Underneath it all they love capitalism. That’s why they’re there.”

As Ralph Waldo Emmerson once said, “Your actions speak so loudly, I can’t hear what you are saying.”

6. Millennials Are Unsatisfied With Their Work

Many articles, including some of the ones I write, start off by pointing out how disengaged we are in the workplace, by citing some of Gallup Research most famous studies. However, on further analysis, according to the Journal of Business and Psychology 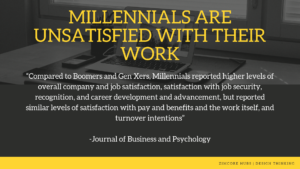 “Compared to Boomers and Gen Xers, Millennials re

By far one of the biggest complaints that many companies dwell on today. Millennials are constantly criticized for their constant need to find something better in the world, instead of staying loyal to their current company. Well, just like the other stereotypes on this list, this one has its own loopholes. As you can probably guess, when you compared the Millennial behavior to other generations, you learn quite a few things. 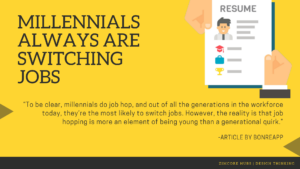 In an article by Bonreapp, they explicitly state the core issue at hand, “To be clear, millennials do job hop, and out of all the generations in the workforce today, they’re the most likely to switch jobs. However, the reality is that job-hopping is more an element of being young than a generational quirk.”

Many studies have found that wanting to switch jobs often is more of an age issue, than a generation issue. This is probably due to people looking for more stability in their lives as they get older because they have more external responsibilities such as taking care of a family and house.

8. Millennials Do Not Save Enough

Millennials are constantly criticized for not buying houses or saving money up to plan for retirement. The notion of being more ‘experience focused’ has led to the infamous world-traveling generation that places doing something, above purchasing something. Looking at financial savings, it turns out that Millennials have saved more for retirement than previous generations. 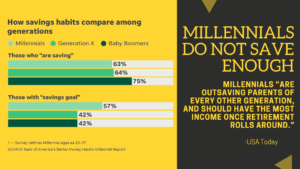 In an article by USA Today, the article states that Millennials “are outsaving parents of every other generation, and should have the most income once retirement rolls around.” They reference a NerdWallet study that claims “the higher savings rate of millennial parents could set them up to retire with over $1 million more than baby boomer parents and over $400,000 more than Generation X parents.” Seems like the constant media advice to save is finally paying off by debunking this Millennial stereotype.