“Your actions speak so loudly, I can’t hear what you are saying” – Ralph Waldo Emerson

In this post, we will be looking at different examples of what these companies are doing, and why they are effective:

Bain and Company in Columbia

One of the big initiatives that Bain and Company pushes for is diversity in the workplace. In the quote earlier, actions speak louder than words, Bain shows a perfect example of this in this post above. You have a balance of sexes in the picture. However, here is where Bain really excels: first off, this is not an in studio picture, these are actual people who work at the company. Second, there are no filters on this picture making it appear a lot more authentic.

In addition, 47% of Millennials, according to Monster actively look for diversity in the workplace. Here Bain and Company capitalizes on that.

When creating recruiting video for a company, you have several different avenues. The first is the testimonial, talking about what it is like to work in the company. Second, is the show case, that video covers why a company is the best place to work for. The last is- the transformational journey. This is where someone goes through life decisions and how they end up at the company. In this video, Zoom put the first video on the people page on LinkedIn. What makes this video great, is not the editing or b-roll shots, but the way that the main character expresses himself with an accent. He does not speak perfect english and their is beauty in that. That embellishment, adds an authentic factor to the video. Imperfect is perfect.

Companies need to think about their fundamental #business strategy in a way that benefits not only their business aspirations, but also #society and the planet. Wendy Woods explains why companies need to take a total societal impact approach. https://t.co/j5hx1OrpFr pic.twitter.com/b6mf4IBFZa


This is a tweet from the Boston Consulting Company is excellent! Typically, when companies tweet, it’s usually text, but BCG used a video. In a Clear Voice survey, 90% of millennials say the optimal length for a social video is two minutes or less. That video, not only has that length, but also someone from the company speaking in a personal, but authoritarian way. A polishing touch, is making sure that her makeup is not too heavy revealing more of her authentic self. 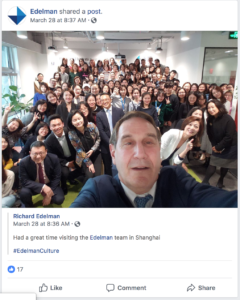 Do what they do, and you will understand why. Richard Edelman nailed it with this photo. While it may seem like a simple selfie picture with some employees, Edelmen is showing more than a bunch of dressed up employees for a crowded selfie. When Edelman, both the person and the company are showing here is that 1. The executives are approachable. 2. That the executive team is open to new ideas, such as taking a selfie. By demonstrating these very implicit actions, they effectively cater to Millennials interest of flatter hierarchies, and inclusion in the workplace.

#FlashbackFriday to Toronto in 2017 for the first #FourSeasonsPopDown. See how an empty concrete building was transformed into a lush urban garden, as award-winning #FourSeasons mixologists and chefs showcased their passion, artistry and imagination.

Great special effects and a whole lot of time. It’s these kind of videos that people love watching, but more importantly shows the behind the scenes work of what really makes this company what it is. Usually people see the end product, but by pulling back the curtain, Millennial IG stalkers now have a better idea of what to expect if they are going to join the Four Seasons team. Its hard work, and people are behind the scenes helping out! Just like them!

Deloitte have an interesting collection of videos on their Youtube channel titled ‘Life at Deloitte’. These videos cover employees discussing their journey working at Deloitte and their overall experience. What is particularly smart about putting these videos on Youtube, is that Millennials will be able to watch these videos and build rapport with the employees. Why? Because they are a Millennial’s age, with the same problems and feelings as anyone else. In addition, there is an aspect of pulling back the curtain and showing who is really working at the company. 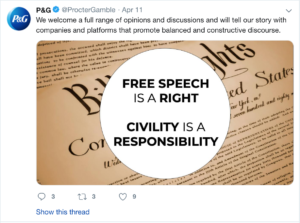 One of the biggest shifts that is happening in the workplace, is an active pursuit for inclusion. While the debate whether or not to include political movements in the workplace is questionable, some companies are able to walk the fine line. In this post, the company is promoting free speech, also implying that employees will feel safe in the world. According to Google’s international study on effect teams, Project Aristotle, psychological safety is one of the top things to consider when creating a high performing team. Luckily, psychological safety and inclusion usually go hand in hand.

#DIY (Do it yourself) is a pretty big trend these days. H.E.B. creatively utilized this trend on on their Pinterest feed where they will have ideas on how to use their foods to make amazing recipes. Here, the company is providing value at the same time, using their brand as the medium. This is one of the few examples of a brand that is adding up front value on Pinterest. 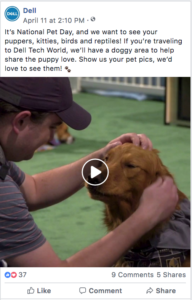 Just about everyone likes their pets. Even the people on Dell’s Facebook page. In this post, Dell leveraged some of the interesting trends like WeRateDogs, a brand started by a 20 year old in college that quickly amassed a following of 2 million in a few months. By asking the audience to participate in discussion, Dell becomes more of a personal entity rather than a faceless corporate conglomerate entity. Main take away, focus on the things that people actually care about.

This is a great example of influencer marketing. Taco Bell put together a show where they would show case their food with a guest on their show. This is meant for entertainment, but also building brand awareness. Taco Bell, with some 60,000 subscribers, invited Rebecca Zamolo to be featured on their show who has 6.6 million followers. At that level, that is a great use of collaboration, however, it gets better. 70% of Millennials trust Youtube celebrities more than actual celebrities Hence, its a smarter move for Taco Bell to get a YouTube influencer to cater to the Millennial audience rather than Kardashian, both from a financial standpoint, but also trust.